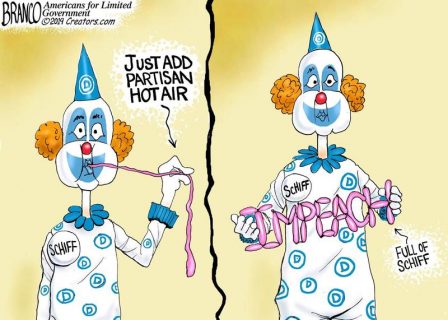 The House vote to establish procedures for a possible impeachment of President Trump, along party lines with two Democrats opposing and no Republicans favoring, was exactly what Alexander Hamilton feared in discussing the impeachment provisions laid out in the Constitution.

Hamilton warned of the “greatest danger” that the decision to move forward with impeachment will “be regulated more by the comparative strength of parties than the real demonstrations of innocence or guilt.” He worried that the tools of impeachment would be wielded by the “most cunning or most numerous factions” and lack the “requisite neutrality toward those whose conduct would be the subject of scrutiny.”

It is almost as if this founding father were looking down at the House vote from heaven and describing what transpired this week. Impeachment is an extraordinary tool to be used only when the constitutional criteria are met. These criteria are limited and include only “treason, bribery, or other high crimes and misdemeanors.” Hamilton described these as being “of a nature which may with peculiar propriety be denominated political, as they relate chiefly to injuries done immediately to the society itself.”

His use of the term “political” has been widely misunderstood in history. It does not mean that the process of impeachment and removal should be political in the partisan sense. Hamilton distinctly distinguished between the nature of the constitutional crimes, denoting them as political, while insisting that the process for impeachment and removal must remain scrupulously neutral and nonpartisan among members of Congress.

Thus, no impeachment should ever move forward without bipartisan support. That is a tall order in our age of hyperpartisan politics in which party loyalty leaves little room for neutrality. Proponents of the House vote argue it is only about procedures and not about innocence or guilt, and that further investigation may well persuade some Republicans to place principle over party and to vote for impeachment, or some Democrats to vote against impeachment. While that is entirely possible, the House vote would seem to make such nonpartisan neutrality extremely unlikely.

It is far more likely that, no matter how extensive the investigation is and regardless of what it uncovers, nearly all House Democrats will vote for impeachment and nearly all House Republicans will vote against it. Such a partisan vote would deny constitutional legitimacy to impeachment. It was because of this fear of partisanship in the House that the framers left the ultimate decision to remove an official to the Senate. The framers intended the Senate, which was not popularly elected at the time the Constitution was written, to be less partisan and act more like judges.

The Supreme Court chief justice presides over the Senate removal trial of a sitting president, and adding that key judicial element would seem to demonstrate a desire by the framers to have a presiding officer whose very job description is to do justice without regard to party or person. In both of the previous removal trials of President Johnson and President Clinton, however, the chief justice played a traditionally symbolic role.

If President Trump is impeached, it is certainly possible that his lawyers would ask Chief Justice John Roberts to play a more substantive role. If the grounds for impeachment designated by the House include criteria such as maladministration or corruption, his lawyers could plausibly demand the chief justice to dismiss the charges as unconstitutional.

After all, the framers explicitly rejected maladministration as a ground for impeachment and removal. James Madison, the father of our Constitution, argued that such open criteria would give Congress far too much power to remove a duly elected president. It would, he feared, turn our republic into a democracy in which the chief executive served at the pleasure of the parliament and could be removed by a simple vote of no confidence.

How many times have we heard from Democrats that “no one is above the law” in reference to President Trump? That is true, but neither is Congress above the law. It cannot substitute its own criteria for those mandated by the Constitution.

The House vote may have been necessary to establish procedures. But the partisanship strongly suggests that what Hamilton regarded as the greatest danger may be on the horizon, namely a vote to impeach a duly elected president based not on “real demonstrations of innocence or guilt” but rather on “comparative strength of parties.”

Michael Savage joins The Alex Jones Show to explain how the criminal democrats are clamoring for impeachment to cover their own crimes.