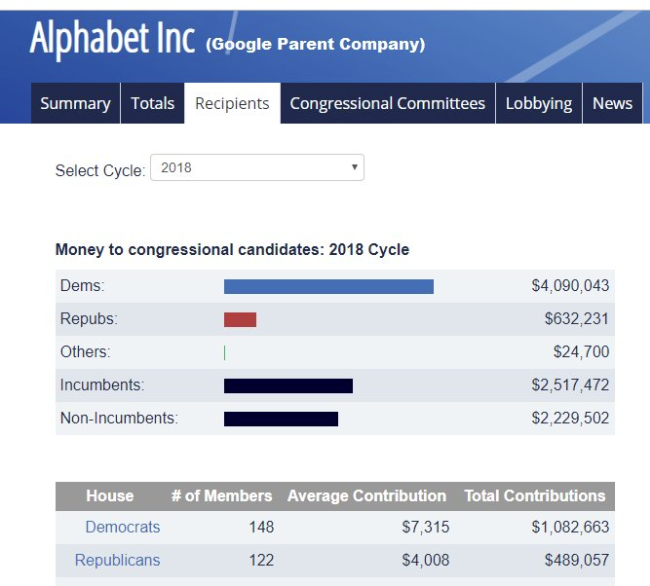 Democrat House members rejected claims of Google’s conservative bias during a Judiciary Committee hearing Tuesday, but a close look at the financial backing of those politicians reveals they could lose a lot by coming out against the tech giant.

Pichai was grilled on whether Google was in violation of the public trust by tracking users’ habits via mobile devices, and also answered questions about the censorship of conservatives.

In Congressman Jim Nadler’s (D-NY) opening statement, he called Google’s bias a “fantasy dreamed up by some conservatives” and a “right-wing conspiracy,” however OpenSecrets.org records reveal he’s bought and paid for by Google’s parent company, Alphabet Inc., his top contributor.

The US government official who says Google bias is a fantasy is a paid puppet of Google pic.twitter.com/ya95BOkDQp

“Google is among the dominant firms in this field. As such, given the public’s widespread use and reliance on its products and services, there are legitimate questions regarding the company’s policies and practices, including with respect to content moderation and the protection of user data privacy.

“But before we delve into these questions, I must first dispense with a completely illegitimate issue, which is the fantasy, dreamed up by some conservatives, that Google and other online platforms have an anti-conservative bias.

“As I have said repeatedly, no credible evidence supports this right-wing conspiracy theory. I have little doubt that my Republican colleagues will spend much of their time presenting a laundry list of anecdotes and out-of-context statements made by Google employees as supposed evidence of anti-conservative bias. But none of that will actually make it true. And even if Google were deliberately discriminating against conservative viewpoints—just as Fox News and Sinclair Broadcasting discriminate against progressive ones—that would be its right, as a private company, to do so.

“But we should not let the delusions of the far right distract us from the real issues that should be the focus of today’s hearing. For example, we should examine what Google is doing to stop hostile foreign powers from using its platform to spread false information, in order to harm our political discourse.”

Open Secrets also shows Google’s parent company, Alphabet Inc., is a major Democrat contributor, including donations of up to $227,199 to the failed campaign of Texas senatorial candidate Beto O’Rourke. 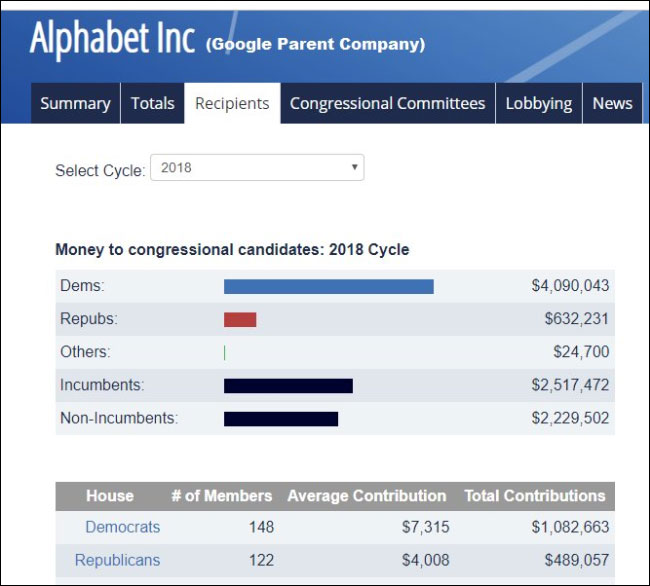