Actress and far-left activist Alyssa Milano betrayed her calls to defund police over the weekend when she phoned cops to defend her from what she believed was an armed gunman.

The incident unfolded Sunday when Milano, 47, reported spotting a “male, 40-year-old, with long rifle” outside her $2.5 million Bell Canyon mansion in Ventura County.

Neighbors reported noticing a large police presence in the neighborhood, along with a police helicopter patrol circling the area.

“Just drove by about 12 armed officers on Bell Canyon Road,” one neighbor wrote in the NextDoor app, according to DailyMail.co.uk. “They are responding to a call reporting a man with a gun in the neighborhood!! This was also the cause of the helicopter. Stay inside, stay safe!”

A neighbor told the Daily Mail police later discovered the suspect was merely a teen who was shooting squirrels with an air soft gun, leading residents to dub the issue, “Squirrelgate.”

“It turned out it was a neighborhood teen with an air gun shooting at squirrels,” a resident confirmed to the Mail.

The false alarm follows months of “defund police” activism from Milano in the wake of Black Lives Matter protests and riots. 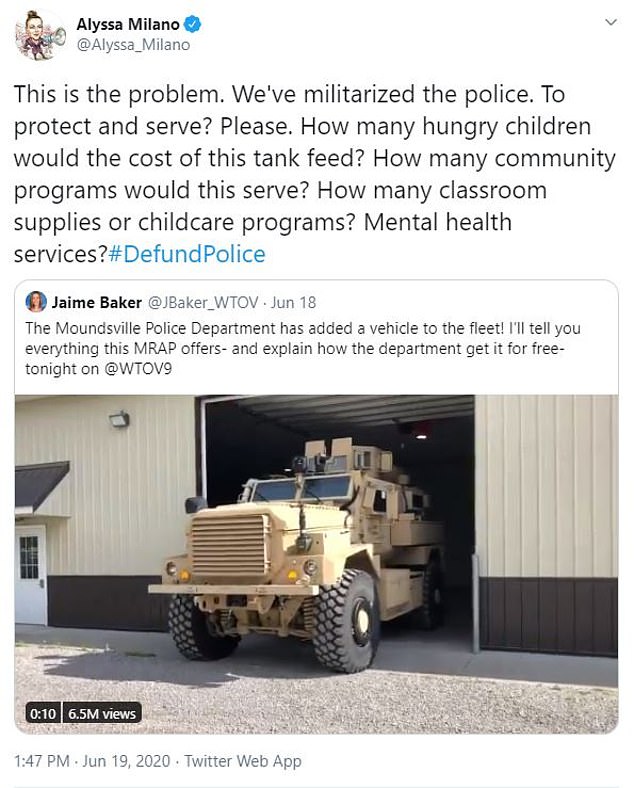 At least one of Milano’s neighbors reportedly slammed the actress’s hypocrisy in calling for defunding the very police she called to save her.

“She can tweet those things because at the end of the day she lives behind gates in a gated community. She knows the police will come to save her. But what about all those people who don’t have that luxury and live in unsafe neighborhoods? She obviously doesn’t care,” the unnamed neighbor is quoted saying by the Mail.

From “defund the police” to “defend me, police”https://t.co/2t5ZDawF3Y

“She uses her platform in hypocritical ways. Why not send your husband into the yard to find out what is actually going on before you call the police? I would guesstimate the response today from law enforcement cost tax payers thousands of dollars.”

Alex Jones breaks down the video showing a man defending his house from a BLM mob screaming threats, and the police decided to arrest him instead of the mob.