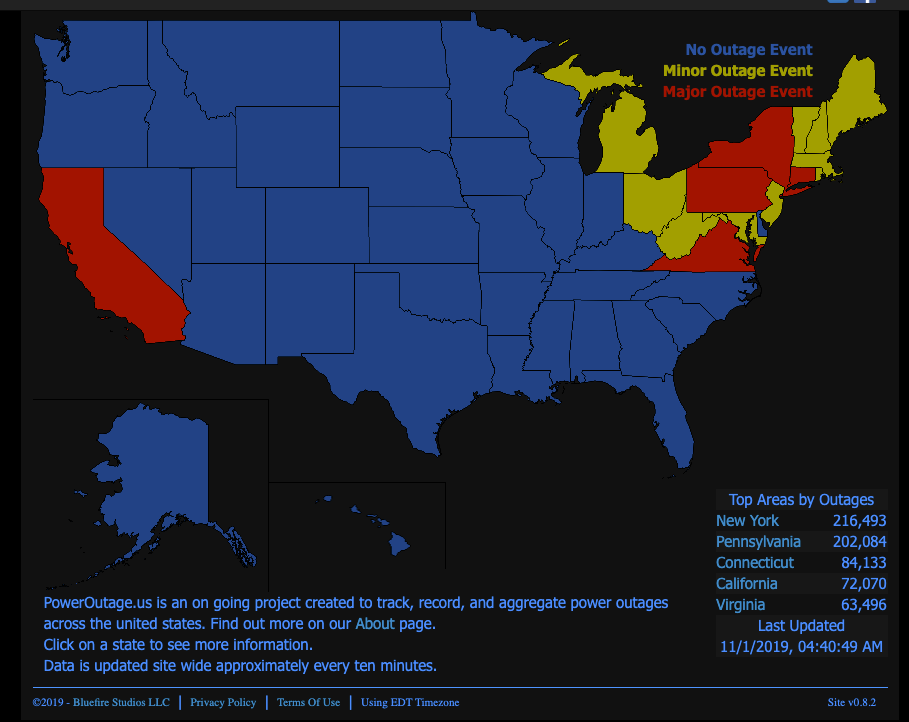 A powerful storm swept through the Mid-Atlantic and Northeast overnight in a spooky fashion, producing 50 mph gusts, damaged powerlines, and has left more than a half-million customers without power on Friday morning.

Approximately 613,00 customers, with the bulk of the power outages in New York (216,00), Pennsylvania (202,00), Connecticut (84,000), Virginia (63,000), and Maine (48,000) were left without power after severe thunderstorms produced damaging winds and torrential rainfall across the Mid-Atlantic and Northeast on Thursday night, the National Weather Service (NWS) reported.

Residents in the Baltimore–Washington metropolitan area were placed under a tornado watch on Halloween evening through midnight. There were no reports of any tornadic activity, though powerful winds up to 50 mph knocked out power to 20,000 customers as of 5:30 am est. Friday.

A Tornado Watch is in effect for the area until midnight. A squall line will move through quickly from west to east late this afternoon and evening. Have a way to receive NWS Warnings and seek shelter before storms arrive. See map for more details. pic.twitter.com/qkeNoK7OYL

Alex Jones and Millie Weaver war game how to win the battle that is for children’s souls
Remember, our Everything Must Go Emergency Sale is happening right now! Get free shipping and double Patriot Points at the Infowars Store right now!

Bloomberg notes that winds up to 79 mph were recorded in Mount Mansfield, Vermont, as the storm swept through late Thursday night, canceling plans for many who were attempting to trick or treat.

According to NWS Weather Prediction Center College Park MD, the dangerous storm that swept through overnight will give way to “cold high pressure over the Lower Mississippi Valley/Tennessee Valley will move into the Mid-Atlantic by Friday evening.”

As November begins, many are wondering what Old Man Winter has in store for North America. Weather reports from Reuters’ commodity desk suggest a “cold season” for many parts of Central and Northeast US.

“North America (winter wheat): The North America winter outlook suggests a cold season across the central/northern US. If this scenario develops, it would point toward elevated winterkill risks for winter wheat, though deeper snow cover than normal could offset the risks. The US Plains in particular show the potential for a cold but wet winter, which might allow snow coverage to protect the Hard Red Winter (HRW) wheat crop, while drier conditions farther east may put the Soft Red Winter (SRW) wheat crop at higher winterkill risk.”

Figure 8: Composite precipitation anomalies (mm) from the top December-February analogs based on the leading ENSO forecast indicators (via Reuters)

Figure 9: Composite temperature anomalies (°F) from the top December-February analogs based on the leading ENSO forecast indicators (via Reuters)