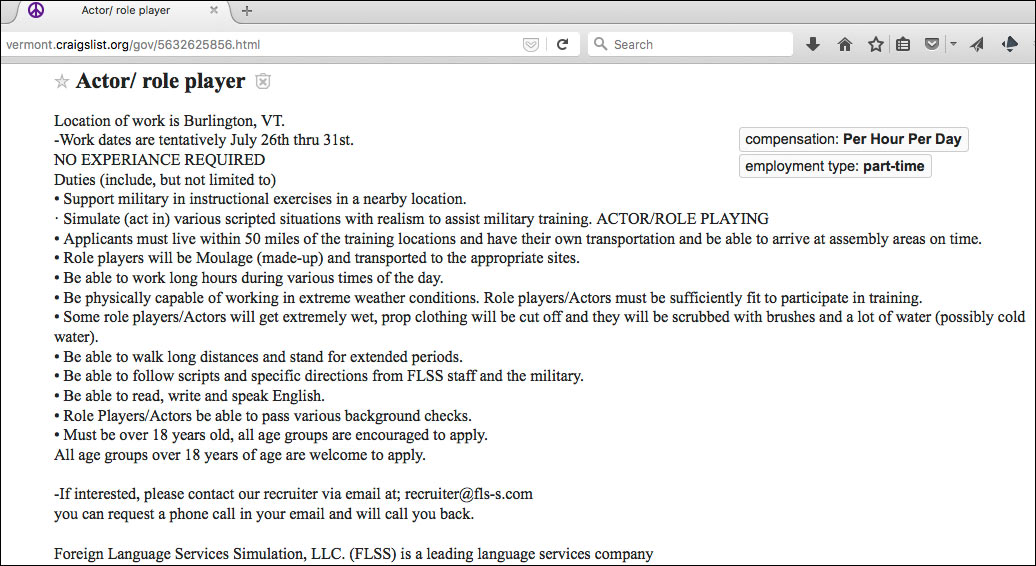 A private government contractor is seeking role players for a simulated military drill set to take place next month in Burlington, Vermont – the site of candidate Bernie Sanders’ campaign headquarters – at the same time as the Democratic National Convention.

A Craigslist ad posted eight days ago by defense contractor Foreign Language Services Simulation, LLC, (FLSS) seeks “actors” and “role players” who will be made up with fake wounds and mock injuries to “support military in instructional exercises in a nearby location.”

The drill, which will include “various scripted situations with realism to assist military training,” will run from July 26th through the 31st, overlapping the dates of the Democratic National Convention, which takes place July 25th through the 28th.

Participants must be “physically capable of working in extreme weather conditions” and “must be sufficiently fit to participate in training.”

Additionally, “Some role players/Actors will get extremely wet, prop clothing will be cut off and they will be scrubbed with brushes and a lot of water (possibly cold water),” the solicitation states.

Burlington, where Sen. Sanders served as mayor in 1986, is also the site of his presidential campaign headquarters and his US senate office.

Many online are deeming the drill’s location and dates selected as suspicious, especially considering that opponent Hillary Clinton will likely defeat Sanders and win the Democrat nomination in Philadelphia next month – to the chagrin of diehard Sanders supporters.

“They’ll stage an event in Bernie’s state to make him look bad, that way it will lessen the detractors at the DNC, that are claiming that Bernie should be the nominee,” one reddit user speculated.

“…Many Democrats fear that if Sanders does not rein in his supporters, the same ugly scene that occurred in Las Vegas last weekend could replicate itself in the Democratic National Convention in Philadelphia,” CNN reported last month.

Infowars verified the authenticity of the ad over the phone with an FLSS operator, who clarified the company only recruits viable candidates, but has nothing to do with the planning or organization of the military exercises.

“We did run an ad and it was for exercise support,” Tony with FLSS told Infowars, aware the ad had stirred controversy. “We do not have a contract, we are competing to gain a contract. The ad was just seeing what availability there was for local folks to get involved since the requirements were pretty light.”

“It’s nothing to do with politics,” Tony stated. “We’re just helping people be prepared to deal with stuff we hope they never have to.”