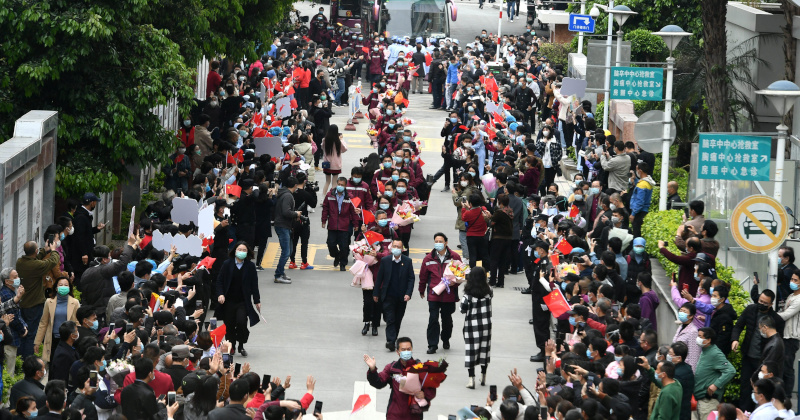 Last week we reported that even as the world’s attention had shifted to the new global coronavirus outbreak epicenters of New York, Italy, Spain and other western nations, China – which rushed to restart its economy at any cost as the alternative was too dire to even consider – had put a major county on lockdown after a new cluster of coronavirus infection had emerged.

To wit, last Wednesday we learned that in post on its social media account, Jia county – which has a population of about 600,000 – said that no one can travel out of Jia county without proper authorization after one person tested positive.

This new cluster emerged just days after China once again revised its virus reporting methodology to also include asymptomatic carriers of the disease, which naturally begged the question why China wasn’t reported his subset of infections previously.

We got the answer overnight when Mainland China reported 39 new coronavirus cases as of Sunday, up from 30 a day earlier, and the number of asymptomatic cases also surged, as Beijing continued to struggle to extinguish the outbreak despite drastic containment efforts.

China’s National Health Commission said in a statement on Monday that 78 new asymptomatic cases had been identified as of the end of the day on Sunday, compared with 47 the day before.

Of the new cases showing symptoms, 38 were people who had entered China from abroad, compared with 25 a day earlier, although how China keeps track of this on an instantaneous basis is unclear. Also it’s odd to blame “imports” as China also closed off its borders to foreigners, though according to Beijing most imported cases involve Chinese nationals returning from overseas.

As Reuters reports overnight, imported cases and asymptomatic patients, who have the virus and can give it to others but show no symptoms, have become China’s chief concern in recent weeks after draconian containment measures succeeded in slashing the infection rate.

This means that whether asymptomatic or not, imported or domestic, Hubei-based or not, on April 5, China reported the most new Coronavirus cases in a month as slowly the disease appears to be reestablishing itself in the world’s most populous nation.

As a result, the Guangdong health commission raised the risk level for a total of four districts in the cities of Guangzhou, Shenzhen and Jieyang from low to medium late on Sunday.

In its panicked scramble to reboot the economy, China has been reporting that daily infections have fallen dramatically from the peak of the epidemic in February, when hundreds were reported daily, but new infections continue to appear daily.

Despite a miraculous rebound in China’s latest PMIs, the truth is that China’s economy has been very slow to recover and by some metrics – as shown below – appears to already be double-dipping.

Mainland China has now reported a total of 81,708 cases, with 3,331 deaths. The real number is likely orders of magnitude higher, and what’s worse, a rebound in cases likely means that round two of the pandemic may just be starting.

Alex Jones examines the parallels between the 2005 movie ‘V for Vendetta’ and the coronavirus pandemic.