Cancer is the second leading cause of death in the developed world, and yet we are still in the dark ages when it comes to treating and understanding it.

The colossal failure of conventional cancer treatments reflects a fundamental misunderstanding of what cancer – the “enemy” – actually is.  For one, chemotherapy and radiotherapy are both intrinsically carcinogenic treatments. The only justification for their use, in fact, is that they are highly effective at damaging the DNA within cells – with the hope that the cancer cells will be more susceptible to being harmed than the healthy ones (sadly, not always true).

The reality, however, is that the “collateral damage” from treatment is inevitable; it is not a matter of “if,” but to what degree the damaging side effects will occur. As in real modern warfare, the decision to strike is often based on deciding how much collateral damage to “civilian” populations is deemed acceptable. This is not unlike the fixation in toxicological risk assessments for drugs, environmental pollutants, food additives, etc., where determining “an acceptable level of harm” (a rather horrible oxymoron) to the exposed population is the first order of business.

Chemo Agent Classified by the WHO as Carcinogenic

The DNA-damaging, or genotoxic effects of chemotherapy and radiotherapy, according to the prevailing wisdom, are the #1 cause of cancer initiation and promotion. This is known as the “Mutational Theory” of cancer, and has been the dominant explanation for half a century. Therefore it is absolutely disconcerting that the standard of care in cancer treatment today is still the use of genotoxic agents versus substances that are able to selectively harm the “bad” cells, leaving the “good” ones intact; which is also known as “selective cytotoxicty,” and is a property characteristic of natural anti-cancer compounds and whole plant extracts. Nowhere is this more clearly demonstrated than in the case of fruit-derived compounds, such as graviola, where cell research indicates that fruit extract may be up to 10,000 times more effective at killing certain cancer cells versus adriamycin (not so affectionately named the “red devil” for its lethal side effects) and is highly selective in which cells it kills.

Take the cancer drug tamoxifen, for example. It is classified by the World Health Organization and the American Cancer Society as a human carcinogen, and has been documented to cause over two dozen health-destroying side effects, and yet it is still being used as a first line treatment for certain types of breast cancer. Does that really make sense?  Even if tamoxifen was effective (which increasingly it is not), does it really matter if it “cures” breast cancer only to cause endometrial or liver cancer (which is often far more deadly than breast cancer) as a direct result of the treatment? Tamoxifen and chemotherapy resistance is increasingly a problem. In the same way that certain pathogenic bacteria become resistant to antibiotics – even becoming stronger after being challenged with them – drug resistance and multi-drug resistance to chemoagents is the canary in the coal mine, indicating the entire paradigm, hinged as it is on patented, highly toxic chemicals, is rearing to collapse.

Similarly, radiotherapy is known to induce secondary cancers, along with a wide range of serious adverse effects. A woman whose breast is irradiated is more likely to develop lung cancer, for instance. But its effects may actually be far worse on the primary cancer it is being used to treat…

When a breast tumor is exposed to radiation, the cells within that tumor are not uniform, but have great heterogeneity. Some of the cells are fast-replicating, whereas some are slow-replicating and benign. Some cells are older, technically senescent, and by their very existence are keeping neighboring cells within the tumor and with greater potential for malignancy from breaking out into invasive growth. There are also cancer stem cells, which are technically slower-replicating and therefore less likely to be destroyed by chemotherapy or radiotherapy, and yet which are responsible for re-seeding and fueling the growth of the tumor itself with a theoretical limitless resupply of daughter cells.

Radiotherapy has been shown to increase the survival and self-renewing capacity of these breast cancer initiating cells by up to 30-fold, which means that while a radiation treatment may initially regress a tumor’s volume/mass, it may actually be selecting out the more radiation-resistant and aggressive subpopulation of tumor cells which ultimately lead to higher malignancy. This promotion of self-initiating cancer cells is also true for chemotherapy, of course. Incidentally, the low-dose radiation used to diagnose breast cancers in x-ray mammography is likely causing far more cancers in women over time than it is said to prevent. If you read the actual peer-reviewed medical literature on the subject you may be surprised to find that the low-dose ionizing radiation is actually far more carcinogenic (3-4 fold higher) than the high-dose radiation it is often compared to in radiation risk assessments. In fact, one of the most well known breast cancer associated genes, namely, BRCA1/BRCA2, confers greater susceptibility to radiation induced breast cancer in those who have it.  In other words, staying away from medical radiation, diagnostic or therapeutic, may be essential to avoid the cancer it is being used to both “prevent” and “treat. 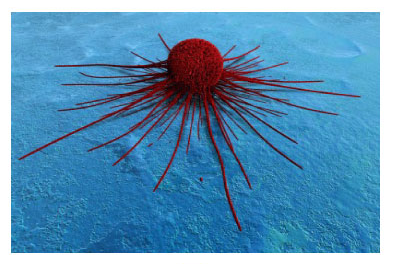 Why Conventional Treatment Fails & Will Continue To Do So

The failure of chemotherapy can work in the same way. When you expose a diverse population of breast tumor cells to a highly toxic agent, a normal response is to become damaged to the point of dying. But cancer may not be a strict random mutation process, but an ancient survival program unmasked; that is, the cancer cell may be drawing from a far more ancient evolutionary and genetic “tool kit” which enables it to survive far harsher cellular environments, e.g. chemical exposure, low oxygen, higher availability of glucose/fructose, acidic pH, etc. and therefore the addition of highly toxic chemotherapy-type chemicals will selectively kill the weaker, and technically healthier (more benign) cells within a breast tumor, while creating the very conditions within which the malignant and more chemoresistant cancer cells may thrive. Multidrug-resistance genes and proteins are involved. When attacked by a chemical (xenobiotic) the cancer cell may “regress” and activate the genetic equipment that enables it to efficiently push out (efflux) the chemoagent being used, surviving, while its neighboring weaker (though technically more normal and healthier) cells die off.

Can you see, then, how radiotherapy and chemotherapy may be responsible for driving a cancer into greater malignancy, at the very moment that it is harming the rest of the body, compromising the immune system (damage to the bone marrow and direct harm to the immune cells)? The incurability of pancreatic cancer vis-à-vis chemotherapy and radiation, therefore, may reflect how the standard treatments themselves are driving the patient into premature death. When the average pancreatic cancer patient (using most chemo and radiation protocols) lives no more than 6 months, do we say that the cancer killed them, or the treatments?

Standard operating procedures is to write off the patients death as being “caused” by an “exceptionally aggressive” form of cancer, rather than to admit that the very treatments may have transformed a relatively slow growing tumor into a rapidly proliferating and invasive one. Think of it this way: if you were being blasted with chemicals and radiation, and you were seeing your neighbors dropping like flies, would you relocate? Can you, therefore, blame a subpopulation of tumor cells, having survived chemotherapy and radiotherapy while it’s neighboring cells did not, moving to another tissue – say, bone, or brain – in order to survive? Cancer, after all, is something our body does (and likely to survive) and not something that happens to it, as if the genes in our body just went off one day like a cancer time-bomb, fatalistically predetermined by the less than perfect genes we inherited from our predecessors.

Given the likelihood that the conventional cancer industry is often not only failing to improve the quality and length of the lives of those who it treats, but quite the opposite, reducing the quality and length of their lives, the time has come to look for safe, effective, affordable, inexpensive and accessible alternatives to patented chemicals and ionizing radiation in the prevention and treatment of cancer. And the solution may be as close to us as our kitchen spice racks:

The Case For Turmeric

While US law presently forbids the medicinal use of natural substances, turmeric has been used in ancient Indian medicine for thousands of years, and curcumin, which gives the spice its golden hue, is one of the most extensively studied natural compounds of all time, with 4,588 references to studies performed on it on the National Library of Medicine’s bibliographic database known as Medline [as of 2.25.2012]. Yet, despite having been shown to have therapeutic value in more than 500 diseases in animal and test tube studies, it still has not been the subject of extensive human clinical trials.  As a public service GreenMedInfo.com has indexed curcumin’s anti-cancer properties in more than 50 cancers, with the top 10 most compelling cancers applications in cancer prevention and treatment listed below:

What Has the Actual Research Shown?

As one can see by the density of research referenced above, curcumin holds great promise. First, it has an exceedingly high margin of safety relative to conventional drugs.  As an example, the dose at which it will acutely kill 50% of the animals given it is 2,000 mg/kg, whereas it only takes 115 mg/kg of 5-fluorouracil (conventional chemo agent) to produce the same effects. What is even more amazing is that it  has been repeatedly demonstrated to possess  both chemoprotective and chemosensitizing properties, which means that it will both enhance the positive cancer-killing effects of conventional chemotherapy, while at the same time protect healthy cells which may be susceptible to being harmed by chemotherapy.  GreenMedInfo.com contains 57 studies on its chemosensitizing properties and 70 on its chemoprotective properties for reference.  As if this wasn’t impressive enough, it also has profound radioprotective and radiosensitizing properties.  Radioprotective substances protect the healthy cells in the body from being damaged by radiotherapy, and radiosensitizing substances help the radiation kill the cancer cells, making them “more sensitive” to the radiation treatments.  GreenMedInfo contains 15 studies on curcumin’s radiosensitizing properties and 23 studies on its radioprotective properties.

Given this growing and compelling body of research, should not curcumin be considered for use in cancer treatment? And if not as a first-line treatment,  then at the very least as an adjuvant in integrative cancer care?