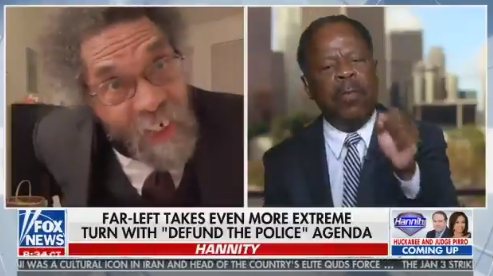 Harvard professor Cornel West and Civil Rights attorney Leo Terrell both took to Sean Hannity last night to debate the idea of defunding the police at a time when riots and looting are widespread across the United States. From the second the debate started, it was clear there was going to be fireworks.

“Do you support this madness of defunding the police?” Hannity asked West, to start.

“This has been a very heavy day for many of us,” West said, dodging the question and alluding to George Floyd’s funeral.

West, whose audio quality made him difficult to hear, continued: “You have to have police who respect the community, there has to be some community control, accountability of both citizens and police and recognizing that the deeper issue of poverty, dilapidated schools, housing…that generates a despair. But there has to be democratic control over the police.”

But it was when Sean Hannity asked Leo Terrell about why liberal politicians in their cities can’t stop the violence that things became heated. “Why didn’t he fix the violence? Why haven’t they fixed our broken school systems? We have failed America’s children,” Hannity asked.

Terrell said West was giving Hannity “old talking points”. Then, he addressed West directly: “I will speak to you, black man to a black man. There is looting going on, and you tried — it is my turn. You are trying to conflate protesting and police misconduct. And shame on you. You are absolutely wrong.”

Terrell then said to Hannity: “You asked him a very simple question: he won’t say he’s not in favor of defunding the police because he is in favor of it.” The “debate” ended with Terrell asking Fox News to cut West’s microphone repeatedly.

You can watch the fireworks here: