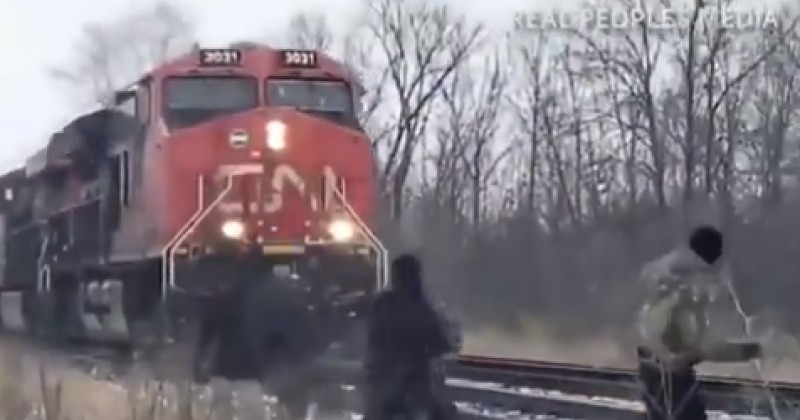 Shocking video out of Ontario, Canada shows left-wing environmentalist protesters attempt to derail and then set fire to a train.

Members of the Mohawk First Nation, who are engaging in rail blockades in an effort to stop the construction of a pipeline, were filmed standing in front of a train before pelting it with rocks and then laying thick tree branches on the tracks.

This is incredibly dangerous and idiotic. #cdnpoli pic.twitter.com/u6b8DiCqH2

The footage then shows the protesters burning wooden pallets in an attempt to set fire to the train.

Another video shows firefighters attending to a car that was engulfed in flames and placed on the railway tracks.

A car was engulfed in flames on Wednesday on the railway tracks at Shannonville Road in Tyendinaga, Ont. Firefighters arrived on scene to extinguish the fire and it is currently unknown if protesters set the fire.

Some reacted to the clips by calling for the group to be listed as a domestic terror organization.

DOMESTIC TERROR: It's time to call a spade a spade. As violence spreads on the tracks, and professional protestors attempt to light trains on fire, a PM must act, or resign.

“It is extremely concerning to see people endangering their own lives and the lives of others by trying to interfere with the trains,” remarked Prime Minister Justin Trudeau.

According to Quebec Premier Francois Legault, some of the demonstrators have also been seen carrying AK-47s.

While some of the protesters have been arrested while manning the blockades, no charges have been brought.