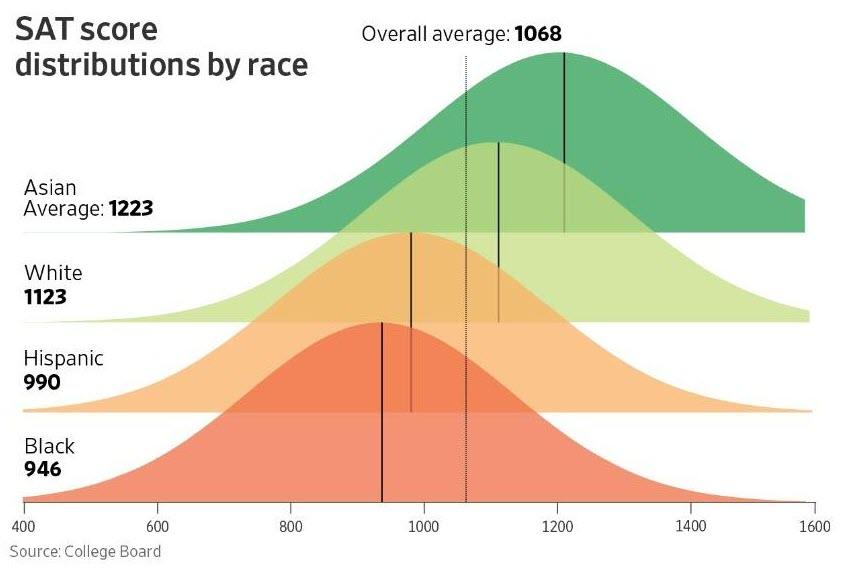 America was once a nation of meritocracy, that shamed the lazy and encouraged hard work; but now, as Millennials increasingly support a “we are all equal” socialist state with leftist politicians villifying the successful, a new wave of anti-meritocratic policies are sweeping across much of academia.

The latest incarnation of this is a much-anticipated lawsuit, filed by a group of students and community organizations, against the University of California, alleging that the university system discriminates against low-income students, racial minorities and others by requiring SAT or ACT admissions tests.

The Wall Street Journal reports that the suit was filed Tuesday in California state court on behalf of a high-school sophomore, two seniors, and a first-year student at Pasadena City College (several California social-justice nonprofits are also plaintiffs in the suit), all of whom it says would be strong candidates for more selective UC campuses except for their test scores.

Aside from this sounding like the standard parent unable to admit their child is not the next Einstein, the plaintiffs seek to bar the UC system from requiring applicants to submit SAT or ACT scores, and from using scores in admission decisions.

“These discriminatory tests irreparably taint UC’s ostensibly ‘holistic’ admissions process,” the lawsuit says, adding that the tests “act as a proxy for wealth and race and thus concentrate privilege on UC campuses.”

Earlier this year,  under relentless pressure from the racial-preferences lobby, the Board caved to the anti-meritocratic ideology of “diversity.”  Colleges, it was suggested, could use this adversity index to boost the admissions ranking of allegedly disadvantaged students who otherwise would score too poorly to be considered for admission.

But, as we reported previously, this gap has persisted for decades. It is not explained by socioeconomic disparities.

Those who rail against “white privilege” as a determinant of academic achievement have a nagging problem: Asians.

Asian students outscore white students on the SAT by 100 points; they outscore blacks by 277 points. It is not Asian families’ economic capital that vaults them to the top of the academic totem pole; it is their emphasis on scholarly effort and self-discipline. Every year in New York City, Asian elementary school students vastly outperform every other racial and ethnic group on the admissions test for the city’s competitive public high schools, even though a disproportionate number of them come from poor immigrant families.

UK election reveals the power YOU have as an individual! Please share this link and keep spreading the message of liberty! The UK snap election, in which conservatives won a powerful majority not seen in decades, proves that humanity is once again embracing the classical liberal idea of self-determination.
Also, get all you need to completely stuff Christmas stockings this year with our Christmas Mega Pack sold AT COST during the 12 Days of Christmas Sale!

The ‘adversity score’ idea was eventually dismissed after significant backlash as defenders of the tests maintain that students with high scores tend to fare well in college and beyond. The standardized tests have been considered by many as an equalizer, allowing colleges to identify talent from high schools with which they are not familiar.

“The notion that the SAT is discriminatory is false,” said a spokesman for the College Board.

“Any objective measure of student achievement will shine a light on inequalities in our education system. Our focus, with our members and partners, is combating these longstanding inequalities.”

Furthermore, many on the left argue that the tests are elitist because ‘only the wealthy can afford test preparation’ but this is entirely false as there are many test-prep aids that are entirely free on the web, such as Khan Academy.

Quite frankly, given our own experience of seeing two young women through the SAT/ACT prep and admissions debacle that California schools now undertake – and having seen so many of their friends succeed by working hard – we would like to see a comprehensive analysis of average hours studied by each group, perhaps as a ‘great equalizer’ of this racist, elitists bias that supposedly exists.

In its March 2018 issue, Freddie deBoer, who works in the Office of Academic Assessment at Brooklyn College, makes a series of significant points in “The Progressive Case for the SAT.” DeBoer argued:

“It’s important to acknowledge that yes, SAT results reflect inequalities in race and social class. Black and Hispanic students and poor students do not perform as well on these tests as their white and affluent counterparts.”

But, he continued, “this reflects a symptom of larger inequality, not a biased test.”

DeBoer acknowledged the argument that affluent parents can invest in special training and can hire coaches to raise their children’s scores. But he pointed to a major 2013 study that showed that the “effect of coaching on a 1600 point scale was about 20 points.”

Furthermore, turning to high school grades instead of test results for college admission decisions poses similar problems, deBoer writes, as grade inflation has resulted in a huge increase in the number of applicants with perfect, 4.0, averages.

Specifically, for the last several years, we have been covering the grade-changing scandal in Baltimore City Public Schools (BCPS). Administrators, teachers, and parents continue to come forward about the widespread fraud that allows children to graduate, even though they’ve missed school or failed classes.

“If they can’t read and you’re not giving them a type of trade or skill, and you’re pushing them through the system, where will that leave them at once they graduate or get the certificate from the school, in life? Like how will they survive?”

“The diploma is getting devalued,” said the teacher who claims to have witnessed grades being changed. “So, the diploma value is not worth a lot.”

We give the final word to DeBoer, who, while admitting that the SAT and ACT aren’t perfect:

“But much of the folk wisdom about them and their deficiencies is wrong, and though critics mean well, they actually risk deepening inequality by attacking these tests.”

“Students who labor under racial and economic disadvantage have very few ways to distinguish themselvesfrom the rest of the pack,” deBoer continues.

“A stellar SAT score is potentially one of the most powerful. We should take care not to rob them of that tool in a misguided push for equality.”

All this constant confusion of correlation with causation (or results spun to fit a progressive narrative) is perhaps why Chinese students are 4 grade levels of US students in math.

As Michael Snyder raged recently, we were once a great light to the rest of the world, but today a large chunk of our population can barely read, write, speak or function in society.  Just consider the following numbers…

#1 One recent survey found that 74 percent of Americans don’t even know how many amendments are in the Bill of Rights.

#2 An earlier survey discovered that 37 percent of Americans cannot name a single right protected by the First Amendment.

#3 Shockingly, only 26 percent of Americans can name all three branches of government.

#4 During the 2016 election, more than 40 percent of Americans did not know who was running for vice-president from either of the major parties.

#5 North Carolina is considering passing a law which would “mean only scores lower than 39 percent would qualify for an F grade” in North Carolina public schools.

#6 30 years ago, the United States awarded more high school diplomas than anyone in the world. Today, we have fallen to 36th place.

#7 According to the Pentagon, 71 percent of our young adults are ineligible to serve in the U.S. military because they are either too dumb, too fat or have a criminal background.

#8 For the very first time, Americans are more likely to die from an opioid overdose than they are in a car accident.

#9 One study discovered that one-third of all American teenagers haven’t read a single book in the past year.

#10 A recent survey found that 45 percent of U.S. teenagers are online “almost constantly”.

#13 In more than half of all U.S. states, the highest paid public employee in the state is a football coach.

#14 During one seven day period last summer, a total of 16,000 official complaints about human feces were submitted to the city of San Francisco. And apparently the problem is very real because one investigation found 300 piles of human feces on the streets of downtown San Francisco.

#15 Every 24 hours, more than a third of all Americans eat fast food.

#16 Less than half of all Americans know which country used atomic bombs at the end of World War II.

#18 Today, the average college freshman in the United States reads at a 7th grade level.

Educating our children properly is one of the most basic things that needs to be addressed, but unfortunately the left has total control of our public schools now, and that means that there is no hope of a major turnaround any time soon. However, of course, all of this will be dismissed as racist (or elitist) by the leftists as excuse after excuse is made for poor performance.