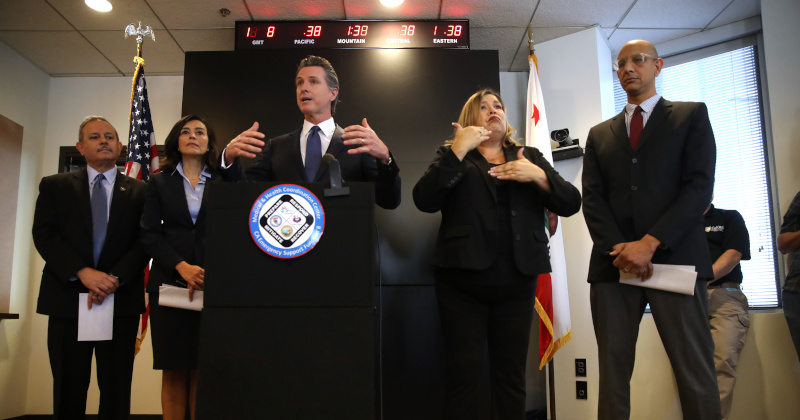 California liberals – the majority of lawmkers, have been ‘propelled by the urgency of the coronavirus crisis’ in order to enact various facets of their agenda, according to the New York Times.

In addition to letting nearly 10,000 inmates out of overcrowded jails and prisons over the last few weeks, and eliminating cash bail for most crimes, the state has also been housing more of the homeless population, while providing laptop computers to children in poor and rural areas of the most populous state in the nation in order to facilitate distance learning.

And while the above measures are supposed to be temporary, California’s left wing is pushing to make the changes permanent – calling this the ‘new normal’ since ‘normal wasn’t working.’

In Los Angeles, Mayor Eric M. Garcetti has proposed using the crisis as a catalyst to achieve free higher education and to mitigate inequality. Invoking Franklin D. Roosevelt and the social welfare programs that he championed, Mr. Garcetti said, “the shock to our economy and our lives recalls the scale and the challenges faced by the generation who sacrificed through the Great Depression and World War II.” – New York Times

“The pandemic has forced a lot of things that were being talked about to actually take place at a very rapid pace,” he added. “The reset button was pushed, and I don’t see us coming back.”

Still, with the nation’s highest poverty rate some analysts have begun to question whether a ‘liberal utopia’ is possible in the face of budget shortfalls and dwindling tax revenues.

As the Times notes: “Already, parts of a progressive agenda formulated months ago when California’s coffers were full — financing medical care for undocumented immigrants and providing greater access to child care are two examples — may now need to be scaled back.”

As for prison releases – advocates for ending mass incarceration have used the pandemic top push for more inmate releases – arguing that America incarcerates too many people. They’ve argued that the high costs of maintaining the prisons will come under great strain as state and local budgets collapse.

“With the safe release of a few thousand more people, and maintaining these declines permanently, California could come out of this crisis with the ability to do the previously impossible: close a prison,” wrote former SF prosecutor Lenore Anderson, president of Californians for Safety and Justice.

And in Los Angeles, thousands of homeless have been moved indoors since the pandemic began spreading in the city.

Longstanding shelters like the Union Rescue Mission, which has faced an outbreak among its residents and staff — two people have died — have had to reduce their capacity to comply with social distancing guidelines.

But a program backed by FEMA called Project Roomkey has picked up the slack, opening up thousands of motel rooms for older homeless residents. -New York Times

“It’s unfortunate it took a pandemic, but I’m thankful everyone is responding the way they are,” said Andy Bales, who runs the Union Resecue Mission in Los Angeles and has worked with the homeless for decades. “It absolutely has energized and mobilized our city, county and state in a way that we have been crying out for a long time.”

California Republicans, meanwhile, insist that the state needs to hold back spending and reopen the state – which has experienced far fewer coronavirus deaths than New York and other states on the East Coast.

Read the rest of the report here.