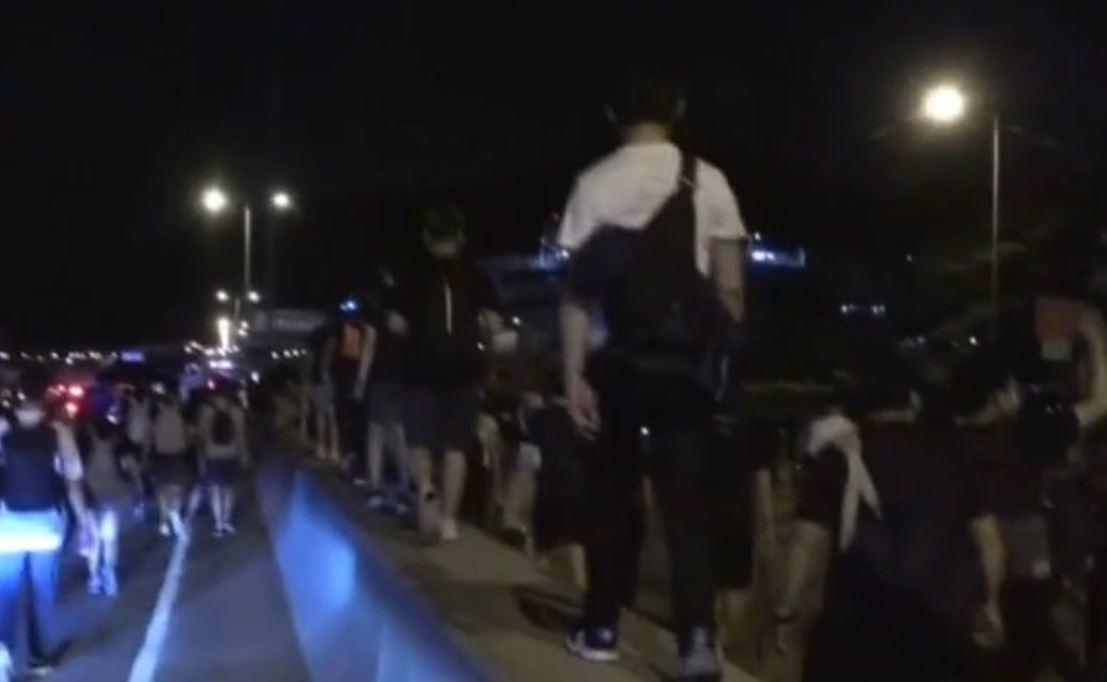 Following one of the most violent days of unrest since the anti-extradition bill protests began three months ago, Hong Kongers again ignored police orders to stay home on Sunday and gathered at Hong Kong International Airport.

Though Sunday’s demonstration was smaller than Saturday’s, police once again escalated their violent tactics, at one point seeming to indiscriminately beat down young people traveling on the city’s public transit on suspicion that they might be traveling to join the protest.

Protest leaders called on supporters to overwhelm roads and rail links to the airport on Sunday and Monday to try and cause mass cancellations of flights like they did two weeks ago, according to the SCMP.

They were met by an army of riot police, who forced them to retreat to Tung Chung, where many demonstrators took refuge in the local MTR station.

Some protesters tried to set up barricades to stop the advancing riot police, leading to scuffles that have become all too familiar at this point in the protest movement.

After a brief, but violent, showdown with police Sunday afternoon, calm had returned to the airport by Sunday night, but travelers were left to improvise alternative routes to the airport as police shut down the express train service, forcing flyers to take taxis and buses on highways clogged with pedestrians.

After leaving the airport, protesters gathered in Tung Chung, where the MTR station was trashed during scuffles with police, and barricades were set on fire. Protesters also gathered at Citygate mall. Many ended up stranded on Lantau Island as police also shut down the Tung Chung MTR line after claiming it was “vandalized” by protesters.

With no access to public transportation, thousands of people resorted to walking on the expressway. Throughout the day, friendly motorists gave protesters rides from the airport and Tung Chung back to more urban areas of Hong Kong.

Quick recap of today: protests started at Hong Kong International Airport, where barricades did go up but everyone ended up retreating to Tung Chung. With the MTR line down and stuck on a mountainous island with traffic, protesters are now walking to the next area on the highway pic.twitter.com/093BEYUR3a

Once again, Hu Xijin, editor of the Communist Party-backed paper the Global Times was out reporting on the “illegal protesters”.

I am at the Hong Kong international airport, one of the busiest airports in the world. It has been disrupted again by illegal protesters today. Passengers have to walk on the usually busy expressway. pic.twitter.com/J8B32lRQIL

Speaking to the Hong Kong Free Press, a 25-year-old protester named James said his group had decided to leave the airport because they felt vulnerable.

“In the evening it’s dangerous, especially at the airport – it’s just a small island…Police can come from the airport and Tung Chung, so it’s two-sided, they can attack from two sides. So it’s hard to defend yourself,” he said.

At the Tung Chung MTR station, protesters smashed turnstiles and other equipment, while spray painting slogans like “Communist Party Railway” on the walls. A wave of anger has been directed at MTR over its decision to allow Hong Kong police to board trains and harass protesters.

In what appears to be a new slogan for the movement, demonstrators spraypainted “Burn With Us” and “8.31”, “7.21” on the station’s walls. The latter dates are references to the attacks on demonstrators on Saturday, and back in Yuen Long on July 21 (Of course, if they start using “down with Pooh,” Beijing will have no choice but to crush the movement).

Protesters also spray painted “burn with us” and “8.31, 7.21” on walls of Tung Chung MTR. The latter refers to indiscriminate attack in Yuen Long on July 21, and police alleged attacks over protesters and civilians in railway stations. #hongkongprotests pic.twitter.com/OfQYZrVk80

In a truly bizarre incident that appeared to confirm reports of local thugs working with Beijing to scare off protesters, a man in a white shirt was reportedly seen chasing protesters with a long knife, though nobody was reported injured and police said they hadn’t received any reports, according to a local English-language blog.

Videos shared on social media Sunday only added to the outrage, as they showed police in helmets and gas masks beating pedestrians and riders inside a train in Prince Edward station.

A spokeswoman for Hong Kong police told Voice of America that police had used “appropriate force” during the clashes with suspected protesters. She admitted that it was difficult to distinguish between protesters and the public as police moved against the crowd at the Prince Edward station.

“Police will continue to take resolute enforcement actions so as to safeguard the city’s public safety and bring all lawbreakers to justice” police said in a news release.

“The behaviors of the radical protesters gravely breach the public peace and pose a serious threat to the safety of police officers on duty and members of the public at the scene,” according to a news release issued Sunday.

Once again, demonstrators turned out in smaller numbers on Sunday after police banned a planned rally and march organized by a group that had spearheaded gatherings held earlier in the protest movement that involved some 2 million people. A few thousand protesters occupied Harcourt Road, a major east-west highway near Admiralty.

As they did on Saturday, protesters chucked bricks and Molotov cocktails at police, while police hammered the crowd with blue-dyed water shot from water cannons. According to VOA, the sound of military helicopters flying overhead and the firing of tear gas rifles gave the day an “ominous” soundtrack.

The increasingly violent nature of the protests has led to a spike in hospitalizations. According to Hong Kong’s Hospital Authority, 41 people were hospitalized on Saturday, with 5 men still in critical condition as of Sunday evening.