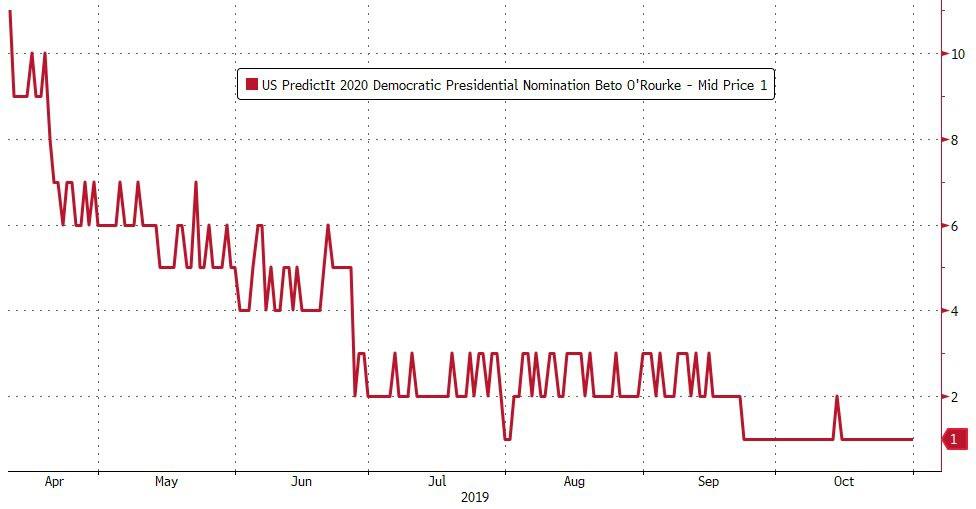 President Trump was quick to react:

Oh no, Beto just dropped out of race for President despite him saying he was “born for this.” I don’t think so!

Having plunged from over 10% to just 1% in the PredictIt betting, former Texas congressman (and failed Texas Senate seat contender) Beto O’Rourke is dropping out of the race to become the Democratic Party’s next Presidential candidate.

Quite a collapse since he entered the 2020 primary in the middle of March with the aura of a celebrity, cheered by rank-and-file Democrats, to being among the lowest polling of the many candidates – even after very strong fundraising efforts early on.

“My service to the country will not be as a candidate or as the nominee,” he said.

The New York Times reports that Mr. O’Rourke made the decision to quit the race in the middle of this week, on the eve of a gathering Friday of Democratic presidential candidates in Iowa, according to people familiar with his thinking. He is not expected to run for any other office in 2020, despite persistent efforts by party leaders and political donors to coax him into another bid for the Senate.

Straight off of Elizabeth Warren’s presidential campaign website is a savings calculator that will tell you how much money you will save annually with her new healthcare plan. Alex Jones puts it to the reality test.
By the way, our Everything Must Go Emergency Sale is now live! Get 50% off DNA Force Plus at the Infowars Store now!

A spokesman to Mr. O’Rourke reiterated that stance on Friday.

“Beto will not be a candidate for U.S. Senate in Texas in 2020,” said Rob Friedlander, an aide to Mr. O’Rourke.

His campaign has been under extreme financial strain, and Mr. O’Rourke’s advisers concluded that proceeding in the race might have meant making deep cuts to his staff in order to pay for advertising and other measures to compete in the early primary and caucus state.

What will the media do now that their once-favorite is gone?

But in a recent interview with Politico, Mr. O’Rourke said that if he did not prevail in the 2020 presidential primary he would not become a candidate again.

“I cannot fathom a scenario where I would run for public office again if I’m not the nominee,” Mr. O’Rourke said last month.

Read his full statement below:

Our campaign has been about seeing clearly, speaking honestly and acting decisively in the best interests of America.

I decided to run for President because I believed that I could help bring a divided country together in common cause to confront the greatest set of challenges we’ve ever faced. I also knew that the most fundamental of them is fear — the fear that Donald Trump wants us to feel about one another; the very real fear that too many in this country live under; and the fear we sometimes feel when it comes to doing the right thing, especially when it runs counter to what is politically convenient or popular.

I knew, and I still know, that we can reject and overcome these fears and choose to instead be defined by our ambitions and our ability to achieve them.

I knew that we would have to be unafraid in how we ran the campaign. We’d have to run with nothing to lose. And I knew that our success would depend not on PACs or corporations but upon the grassroots volunteers and supporters from everywhere, especially from those places that had been overlooked or taken for granted.

We should be proud of what we fought for and what we were able to achieve.

Together we were able to help change what is possible when it comes to the policies that we care about and the country we want to serve. We released the first comprehensive plan to confront climate change of any of the presidential candidates; we took the boldest approach to gun safety in American history; we confronted institutional, systemic racism and called out Donald Trump for his white supremacy and the violence that he’s encouraged against communities that don’t look like, pray like or love like the majority in this country; and we were one of the first to reject all PAC money, corporate contributions, special interest donations and lobbyist help.

We proposed an economic program that focused on both equality and equity and would give every American the certainty that one job would be enough; and a healthcare plan that would guarantee that every one of us is well enough to live to our full potential.

We knew the only way our country would live up to its promise is if everyone could stand up to be counted. We released the most ambitious voter registration and voting rights plan, one that would bring 55 million new voters into our democracy, and remove barriers for those who’ve been silenced because of their race, ethnicity or the fact that they live with a disability.

We spoke with pride about El Paso and communities of immigrants. We elevated the plight and the promise of refugees and asylum seekers. And we proposed nothing short of rewriting this country’s immigration laws in our own image, to forever free from fear more than 11 million of our fellow Americans who should be able to contribute even more to our shared success.

And at this moment of truth for our country, we laid bare the cost and consequence of Donald Trump: the rise in hate crimes, the terror attack in El Paso, the perversion of the Constitution, the diminished standing of the United States around the world. But we also made clear the common responsibility to confront him, to hold him accountable and ensure that he does not serve another term in office. Committing ourselves to this task not as Democrats or Republicans, but as Americans first before we are anything else.

I am grateful to each one of you, and to all the people who made up the heart and soul of this campaign. You were among the hundreds of thousands of our fellow Americans who made a donation, signed up to volunteer or spread the word about this campaign and our opportunity to help decide the election of our lifetime.

You have been with me from the beginning, through it all. I know that you did it not for me personally, not for the Democratic Party, but for our country at this defining moment. Though today we are suspending this campaign, let us each continue our commitment to the country in whatever capacity we can.

Let us continue to fearlessly champion the issues and causes that brought us together. Whether it is ending the epidemic of gun violence or dismantling structural racism or successfully confronting climate change before it is too late, we will continue to organize and mobilize and act in the best interests of America.

We will work to ensure that the Democratic nominee is successful in defeating Donald Trump in 2020. I can tell you firsthand from having the chance to know the candidates, we will be well served by any one of them, and I’m going to be proud to support whoever that nominee is.

And proud to call them President in January 2021, because they will win.

We must support them in the race against Donald Trump and support them in their administration afterwards, do all that we can to help them heal a wounded country and bring us together in meeting the greatest set of challenges we have ever known.

I’m confident I will see you down the road, and I look forward to that day.

With you always, and forever grateful.

Maybe a little more Spanish-speaking, a little more gun-grabbing, a few more dentist appointment videos, and a little more swearing would have done the job… hey, you know what they say – 3rd time’s the charm (just ask Hillary)!