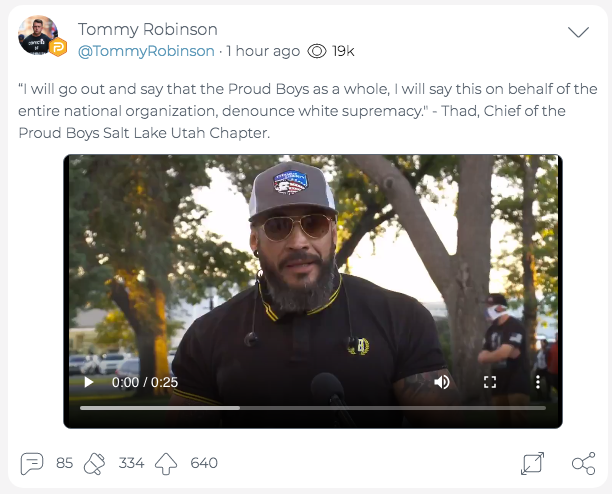 Black members of the group Proud Boys are speaking out in defense of both the organization and of Donald Trump following a controversial incident during Tuesday night’s presidential debate.

Confusion surrounding an answer President Trump gave during the first Trump/Biden debate turned into a nationwide frenzy over Proud Boys.

When Wallace asked POTUS to “condemn white supremacists and militia groups and to say that they need to stand down,” Trump asked which group he should condemn.

Biden interjected and suggested he denounce Proud Boys, so President Trump said, “Proud Boys? Stand back and stand by.”

Trump was clearly saying, “stand back and stand by” in reference to Wallace telling POTUS to instruct “white supremacists” to “stand down.”

Instead, liberal media and politicians are twisting the response to make it seem as if the president told Proud Boys to stand by and wait for marching orders.

Chris Wallace: “Are you willing, tonight, to condemn white supremacists and militia groups and to say that they need to stand down…”

Trump: “Proud Boys, stand back and stand by! But I’ll tell you what, somebody’s got to do something about antifa and the left.” pic.twitter.com/4vrPocKzcu

President Trump clarified his stance on Wednesday, saying, “I don’t know who the Proud Boys are, I can only say they have to stand down. Let law enforcement do their work.”

While the media works overtime to try and paint Proud Boys as a racist, white supremacist group, it’s simply not true.

The group is comprised of every race, color and creed, and the only true belief is that Western culture is superior to others.

In fact, the group’s international chairman Enrique Tarrio, who was voted into the leadership position by his peers, is a black Cuban-American.

Discussing the debate with Sky News, Tarrio said, “We’ve been called many names, but probably the most inaccurate name you can call us is white supremacists. We are not a white supremacist group.”

Chief of the Proud Boys’ Salt Lake City, Utah chapter, Thad, made a public statement on Thursday saying, “The proud boys, as a whole, I will say this on behalf of the entire national organization, denounce white supremacy. We are in no way, shape, or form white supremacists. We have a vetting system that just gets those guys out of our hair.”

Speaking on his experience since joining the group, he explained, “We’re mixed between all different races, ages and sexualities. We got gay members, Asian, black, Hispanic, Indian. There’s not one racist, redneck Nazi I’ve met yet.”

In the days following the debate, mainstream media has gone Proud Boys crazy.

After @JoeBiden invoked the far-right "Proud Boys" group and President Donald Trump told them to "stand back and stand by," CNN and MSNBC gave the club some nonstop advertising.

Democratic presidential candidate Joe Biden showed an image showing a Proud Boys logo with the slogan “Stand back, stand by,” during a press conference on Thursday.

“Nobody has ever sent that kind of message in American history,” Biden stated, claiming Trump is “race-baiting.”

Proud Boys gear with the phrase is being sold on Amazon.

Amazon is now blocking the sale of items reading “Stand back, stand by,” with a spokesperson telling CBS, “All sellers must follow our selling guidelines and those who do not will be subject to action including potential removal of their account. The products in question have been removed.”

NEW VIDEO: The Proud Boys are more than just supporters of Trump. His longtime advisor and confidante Roger Stone is openly a proud boy member. The reason Trump won't denounce them is because he is one. #ProudBoyTrump. Pass it on. pic.twitter.com/NX1PD5c421

Comedian Kevin Hart called Proud Boys “the KKK” in an Instagram post, telling followers, “If this isn’t enough to make you go vote then I don’t know what is.”

If this isn’t enough to make you go vote then I don’t know what is….Wake up!!!!! This man is promoting hate at the highest level. Blunt fucking racism…..FUCKING RACISM!!!! If you don’t see it this way then your apart of the fucking problem!!!! I SAID WHAT I SAID AND I WILL STAND ON THAT SHIT!!!!!!

The establishment’s focus on the group is likely to backfire and make the organization more popular than ever.