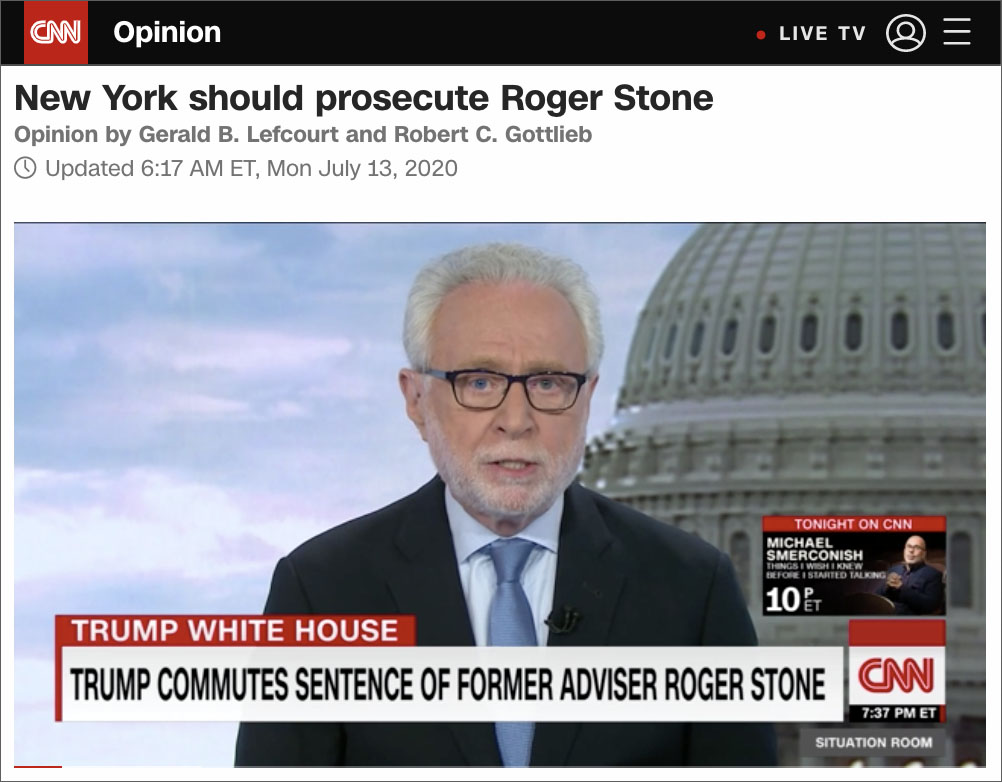 An attorney who had helped billionaire pedophile Jeffrey Epstein get a reduced sentence for his sex trafficking of minors is now arguing that Roger Stone should be prosecuted again over the debunked Russia collusion narrative.

Gerald B. Lefcourt and another lawyer penned an op-ed for CNN calling for New York to bring state charges against Stone after President Trump commuted his 40-month sentence last week.

Lefcourt claimed that the Constitution is “under assault” due to Trump’s perfectly legal commutation of Stone’s sentence.

“To almost no one’s surprise, days before Roger Stone’s prison sentence was about to begin, President Donald Trump has spared his long-time political crony from the pen — late Friday, Mr. Trump commuted Stone’s sentence,” Lefcourt wrote. “It is time for New York prosecutors to answer this latest assault by Trump on the rule of law: They should ready a state prosecution of Stone.”

“Bringing a new case against Stone is possible thanks to Governor Andrew Cuomo and the New York Legislature for Assembly Bill 6653. Signed into law last October, AB6653 enables New York district attorneys to prosecute what effectively amounts to certain friends and family of any president who pardoned them for federal convictions. Among the people who can be prosecuted are associates with information relevant to a civil or criminal investigation of the president. That would be Roger Stone.”

“Both of us have been criminal defense lawyers in New York for more than 40 years. It is not our habit to advocate prosecuting anyone. But we are defenders of our Constitution first. It is under assault,” Lefcourt added.

But interestingly, Lefcourt fought to get Epstein a sweetheart deal in 2008, reducing his charges from child sex trafficking and rape of minors to soliciting prostitution.

Lefcourt in recent weeks had been consulting with Epstein’s current defense lawyers about a non-prosecution deal that Lefcourt had cut with the U.S. Justice Department in 2007, that said Epstein would not be federally prosecuted in Florida as part of a probe there involving suspected sexual abuse of underage girls.

The deal called for Epstein to plead guilty to prostitution-related charges involving an underage girl in a case lodged by a state prosecutor, and to register as a sex offender. In exchange, Epstein and his suspected co-conspirators would not be hit with far more serious federal criminal charges.

U.S. Attorney for Manhattan Geoffrey Berman has said that deal did not prevent Berman’s office from filing the new child sex trafficking case against Epstein last month, even though it involves the same time frame, the same conduct and Epstein’s home in Florida. Berman said the 2007 deal did not bar him, or federal prosecutors outside of southern Florida, from charging Epstein for the same conduct and time frame.

Lefcourt said Berman is wrong. “The deal, if you read it, says to cover all federal and state liability, and even mentions this statute” of sex trafficking, Lefcourt said. “We were preparing to argue that the deal covers this.”

“If you read the agreement, and know that it was approved by the deputy attorney general of the United States, and there was no new women” alleged to be abused since 2007 then the current prosecution “should have been precluded,” Epstein said.

So Lefcourt was willing to save Epstein’s skin despite the mountains of evidence and witnesses against him, but is advocating for Roger Stone to be prosecuted AGAIN for a process crime related to another crime that never happened, the Russian collusion hoax.

The War Room gets a surprise visit from Roger Stone with big breaking news exposing more corruption and mistreatment against him.