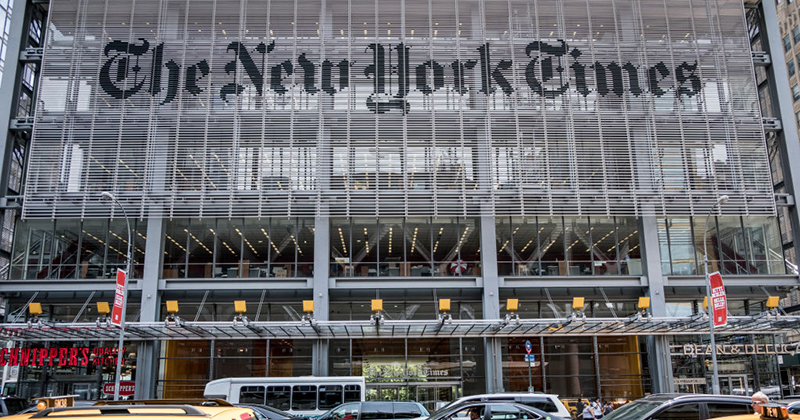 The anonymous psychiatrist behind the wildly popular Slate Star Codex (SSC) has taken down the popular blog after the New York Times threatened to dox him in a “mostly positive” upcoming article.

“When I expressed these fears to the reporter, he said that it was New York Times policy to include real names, and he couldn’t change that. After considering my options, I decided on the one you see now. If there’s no blog, there’s no story. Or at least the story will have to include some discussion of NYT’s strategy of doxxing random bloggers for clicks,” wrote “Scott Alexander” – the author’s real first and middle name, who says he’s tried to keep his last name secret.

(Of course, the Times’ policy on including real names is utter bullshit – and didn’t extend to, among others, the anonymous White House employee who penned an Op-Ed aimed at damaging the Trump administration – or the multitude of ‘anonymous officials’ cited for three years in support of the Trump-Russia hoax.)

1,500+ @nytimes articles on Banksy respected his pseudonymity,
because art.


In re NYT vs @slatestarcodex, this seems relevant: According to the NYT itself, there is no one-size-fits-all policy. Which makes it even more difficult to understand why the NYT would promise/threaten to doxx Scott. https://t.co/d7xfZJww39 pic.twitter.com/bqSRiIdmih


SSC has long been considered one of the last bastions of free speech – between Alexander’s own thoughts on (what shouldn’t be) controversial topics such as feminism, or his support of ex-Google employee James Damore’s opinions against the company’s ideological echo chamber – to the largely unmoderated comments section where contributors could speak their mind.

Alas, the blog is no more – as Alexander explains, revealing his identity would compromise his relationship with current and future patients, and may lead to his firing from the clinic where he works.

“I have a lot of reasons for staying pseudonymous. First, I’m a psychiatrist, and psychiatrists are kind of obsessive about preventing their patients from knowing anything about who they are outside of work. You can read more about this in this Scientific American article – and remember that the last psychiatrist blogger to get doxxed abandoned his blog too. I am not one of the big sticklers on this, but I’m more of a stickler than “let the New York Times tell my patients where they can find my personal blog”. I think it’s plausible that if I became a national news figure under my real name, my patients – who run the gamut from far-left anarchists to far-right gun nuts – wouldn’t be able to engage with me in a normal therapeutic way. I also worry that my clinic would decide I am more of a liability than an asset and let me go, which would leave hundreds of patients in a dangerous situation as we tried to transition their care.

The second reason is more prosaic: some people want to kill me or ruin my life, and I would prefer not to make it too easy. I’ve received various death threats. I had someone on an anti-psychiatry subreddit put out a bounty for any information that could take me down (the mods deleted the post quickly, which I am grateful for). I’ve had dissatisfied blog readers call my work pretending to be dissatisfied patients in order to get me fired. And I recently learned that someone on SSC got SWATted in a way that they link to using their real name on the blog. I live with ten housemates including a three-year-old and an infant, and I would prefer this not happen to me or to them. Although I realize I accept some risk of this just by writing a blog with imperfect anonymity, getting doxxed on national news would take it to another level.” -Scott Alexander, SSC

The individual is outgunned at all times. We cannot easily fight back. But this is ridiculous. So many great people gathered around @slatestarcodex. I want it back.


So, if the Times does indeed proceed to dox Alexander, will Twitter ban them for targeted harassment?

We are all Mr. Anderson. https://t.co/H5HbsguBEH


NPR and Black Lives Matter are working together to destroy America.