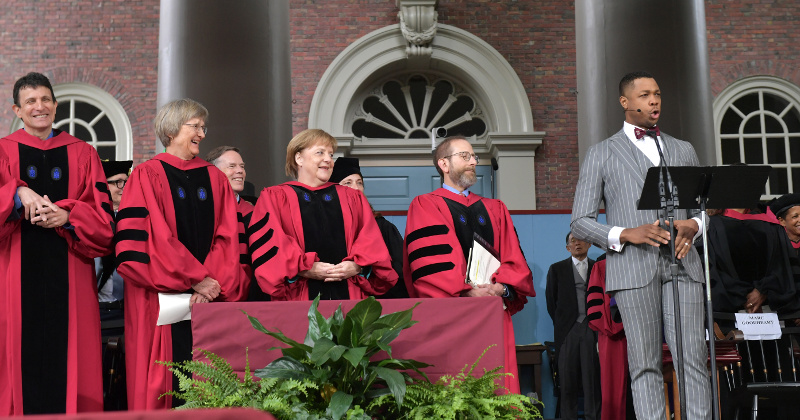 The chancellor has addressed students at the elite university, encouraging them to shape the future.

Her halting speech appeared to contain a few digs at President Donald Trump, without mentioning him by name.

German Chancellor Angela Merkel delivered a commencement speech to Harvard graduates on Thursday after being greeted with rousing applause when introduced as “one of the most respected and influential leaders of the postwar era.”

John Cleese hit back at critics who savaged him for a tweet in which he said that London is no longer an English city.

The chancellor hit on other subjects including the opportunities and threats posed by new technologies, as well as the challenge of combating climate change.

She warned students that nothing could be taken for granted, yet encouraged them to realize that: “Anything that seems to be set in stone and unalterable, can be changed. Every change begins in the mind.”

Merkel also acknowledged Germany’s historic responsibility, as well as the theme of forgiveness, noting that: “The relations between Germany and the US, too, show how former enemies can become friends.”

During that passage, she underscored the importance of transatlantic relations based on shared values, referring to George Marshall’s famous 1947 Harvard commencement speech in which he unveiled his plan for helping rebuild Europe after the war.

In clear reference to current US policy under President Trump, she said, “protectionism threatens the foundations of our prosperity.” Instead, Merkel laid out a different path, one that is, “Multilateral rather than unilateral, global rather than national, outward looking rather than isolationist. In short, we have to work together rather than alone.”

Though the biggest applause by far came when she told those present, “We must be honest with others and with ourselves, and that means not calling lies truth and not calling the truth lies.” The line struck a note with the audience and she was given a standing ovation for it.

Nationalists are portrayed by MSM and globalist elites as “stupid” or “bigoted” for loving their own countries.