What we are all watching unfold right now is a complete and total financial nightmare for Italy.  Italian bond yields are soaring to incredibly dangerous levels, and now the yield curve for Italian bonds is turning upside down.  So what does that mean? 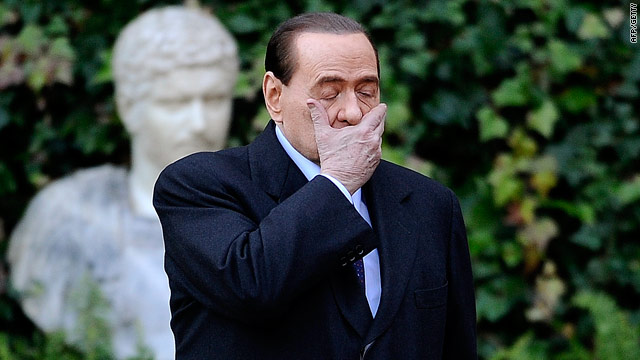 Normally, government debt securities that have a longer maturity pay a higher interest rate.  There is typically more risk when you hold a bond for an extended period of time, so investors normally demand a higher return for holding debt over longer time periods.  But when investors feel as though a major economic downturn or a substantial financial crisis is coming, the yield on short-term bonds will often rise above the yield for long-term bonds.  This happened to Greece, to Ireland and to Portugal and all three of them ended up needing bailouts.  Now it is happening to Italy and Spain may follow shortly, but the EU cannot afford to bail out either of them.  An inverted yield curve is a major red flag.  Unfortunately, there does not seem to be much hope that there is going to be a solution to this European debt crisis any time soon.

We are witnessing a crisis of confidence in the European financial system.  All over Europe bond yields went soaring today.  When I finished my article aboutthe financial crisis in Italy on Tuesday night, the yield on 10 year Italian bonds was at 6.7 percent.  I awoke today to learn that it had risen to 7.2 percent.

The yield curve for Italian bonds is in the process of turning upside down.

If you want to see a frightening chart, just look at this chart that shows what has happened to 2 year Italian bonds recently.

Do phrases like “heading straight up” and “going through the roof” come to mind?

So what does it say when even open market manipulation by the European Central Bank is not working?

Part of the reason why Italian bond yields rose so much on Wednesday was that London clearing house LCH Clearnet raised margin requirements on Italian government bonds.

But that doesn’t explain why bond yields all over Europe were soaring.

The reality is that bond yields for Spain, Belgium, Austria and France also skyrocketed on Wednesday.

This is a crisis that is rapidly engulfing all of Europe.

But at this point, bond yields in Europe are still way too low.  European leadersshattered confidence when they announced that they were going to ask private Greek bondholders to take a 50% haircut.  So now rational investors have got to be asking themselves why they would want to hold any sovereign European debt at all.

There is no way in the world that any rational investor should invest in European bonds at these levels.

Are you kidding me?

If there is a very good chance that private bondholders will be forced to take huge haircuts on these bonds at some point in the future then they should be demanding much, much higher returns than this.

But if bond yields continue to go up in Europe, we are going to quickly come to a moment of very great crisis.

The following is what Rod Smyth of Riverfront Investment Group recently told his clients about the situation that is unfolding in Italy….

“In our view, 7% is a ‘tipping point’ for any large debt-laden country and is the level at which Greece, Portugal and Ireland were forced to accept assistance”

Other analysts are speaking of a “point of no return”.  For example, check out what a report that was just released by Barclays Capital had to say….

“At this point, Italy may be beyond the point of no return. While reform may be necessary, we doubt that Italian economic reforms alone will be sufficient to rehabilitate the Italian credit and eliminate the possibility of a debilitating confidence crisis that could overwhelm the positive effects of a reform agenda, however well conceived and implemented.”

But unlike Greece, Ireland and Portugal, the EU simply cannot afford to bail out Italy.

Italy’s national debt is approximately 2.7 times larger than the national debts of Greece, Ireland and Portugal put together.

Plus, as I noted earlier, Spain is heading down the exact same road as Italy.

Europe has simply piled up way, way too much debt and now they are going to pay the price.

Global financial markets are very nervous right now.  You can almost smell the panic in the air.  As a CNBC article posted on Wednesday noted, one prominent think tank actually believes that there is a 65 percent chance that we will see a “banking crisis” by the end of November….

“There is a 65 percent chance of a banking crisis between November 23-26 following a Greek default and a run on the Italian banking system, according to analysts at Exclusive Analysis, a research firm that focuses on global risks.”

Personally, I believe that particular think tank is being way too pessimistic, but this just shows how much fear is out there right now.

It seems more likely to me that the European debt crisis will really unravel once we get into 2012.  And when it does, it just won’t be a few countries that feel the pain.

For example, when Italy goes down many of their neighbors will be in a massive amount of trouble as well.  As you can see from this chart, France has massive exposure to Italian debt.

Just like we saw a few years ago, a financial crisis can be very much like a game of dominoes.  Once the financial dominoes start tumbling, it will be hard to predict where the damage will end.

Some believe that what is coming is going to be even worse than the financial nightmare of a few years ago.  For example, the following is what renowned investor Jim Rogers recently told CNBC….

Rogers says that the reason the next crisis is going to be so bad is because debt levels are so much higher than they were back then….

So what is the “endgame” for this crisis?

“It is time for a breakthrough to a new Europe”

So what kind of a “breakthrough” is she talking about?  Well, Merkel says that the ultimate solution to this crisis is going to require even tighter integrationfor Europe….

“That will mean more Europe, not less Europe”

As I have written about previously, the political and financial elite of Europe are not going to give up on the EU because of a few bumps in the road.  In fact, at some point they are likely to propose a “United States of Europe” as the ultimate solution to this crisis.

But being more like the United States is not necessarily a solution to anything.

The U.S. is 15 trillion dollars in debt and extreme poverty is spreading like wildfire in this nation.

No, the real problem is government debt and the central banks of the western world which act as perpetual debt machines.

By not objecting to central banks and demanding change, those of us living in the western world have allowed ourselves to become enslaved to gigantic mountains of debt.  Unless something dramatically changes, our children and our grandchildren will suffer under the weight of this debt for as long as they live.

Don’t we owe future generations something better than this?