Well, we just had another bad jobs report.  The U.S. economy created just 80,000 new jobs during the month of June.  Normally, about 125,000 new jobs need to be created every month just to keep up with population growth.  So it is a bit odd that the official unemployment rate did not rise above 8.2%. 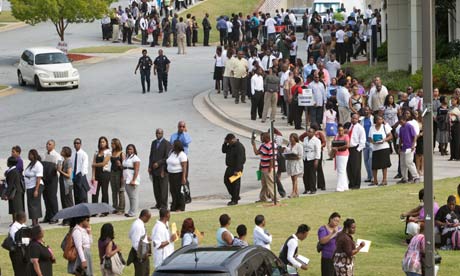 What is even more alarming is that the Social Security Administration is telling us that 85,000 U.S. workers “left the workforce” and enrolled in the Social Security Disability Insurance program during the month of June.  That means that the number of Americans enrolling in Social Security Disability actually exceeded the number of new jobs that was created.  That is definitely not a sign of recovery.  Unfortunately, this is about as good as things are going to get.  Right now corporate profits are at an all-time high and usually after a recession has ended the percentage of working age Americans that have jobs bounces back very strongly.  But that has not happened this time, and when the next economic crisis hits things are going to get a lot worse.

The headline to this article states that there will never be enough jobs in America again.

How could that possibly be true?

Well, the sad truth is that it is very hard to make a profit on an employee in the United States today.

These days a lot of small business owners have decided that it is simply not worth the hassle to hire more employees.  If you can’t make a profit on them, what is the point?

If there was going to be a major rebound in hiring, we would have seen it by now.  Corporate profits are at an all-time high as I mentioned earlier.  How much more money do they need to make before they start hiring?

But I don’t blame them.  Our politicians have loaded the system with plenty of incentives NOT to hire workers.

Yesterday, I wrote about how Barack Obama has been a one man wrecking crew when it comes to killing jobs.  But he is not the only one to blame.  The truth is that politicians from both political parties have been making things more difficult for employers for decades.

Today, many employers are trying to replace as many employees as possible with computers, automation, robotics and other forms of technology.  Those are jobs that are not ever going to come back.

But instead of hiring American workers, many big corporations are taking advantage of the emerging “one world economy” and are setting up shop in countries where it is legal to pay slave labor wages.

So how are American workers supposed to compete with that?

The truth is that they can’t.

Today, you aren’t just competing for jobs with your neighbors.  Your competition also includes millions upon millions of hard working people on the other side of the globe that will gladly work 12 hour shifts in nightmarish conditions for a dollar an hour.

The United States has been losing millions of jobs to lower wage countries, and the fierce competition for the jobs that remain is driving down wages in this country.

As a result, many of our greatest cities that were once the envy of the entire world have become cesspools of filth, decay and wretchedness.

We are going to continue to bleed jobs because both major political parties are fully convinced that merging our labor pool with the labor pool of the rest of the world is a grand idea.

Republicans have been brainwashed into believing that a one world economic system is actually “conservative”.  They have been told that it is “conservative” to merge our economy with countries ruled by third world dictators and brutal communist regimes that have no respect for human rights at all.

Democrats have been brainwashed into believing that merging our economy into a one world economic system is “good for American workers” and will bring more prosperity to this country.

Barack Obama is even negotiating a treaty right now that would reportedly ban all “Buy American” laws.

How stupid can we be?

If we merge our labor pool with the labor pool of the rest of the world with no protection, guess where our wages and our standard of living is going to go?

The answer is obvious.

The “giant sucking sound” that Ross Perot warned us about so many years ago has become a reality.

It is just basic economics.

Well, it is the same thing with employees.

U.S. workers can’t compare with low wage workers on the other side of the world.  It is simply no contest.

Meanwhile, our control freak politicians continue to shove more jobs out the door by piling on even more taxes, rules and regulations.

Unfortunately, these trends are not going to change.  It doesn’t matter who gets elected.  The bleeding of jobs is going to continue.

In fact, we should probably be celebrating that things are still as good as they are.

In the future they will be a whole lot worse.

The period we are in right now was supposed to be the recovery.  During the last recession the percentage of working age Americans with jobs fell dramatically.  Since the end of the recession, that number has stayed remarkably flat…. 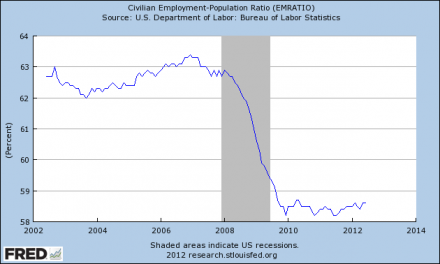 Now the next major downturn is rapidly approaching.

When it hits, the unemployment rate is going to go well up into the double digits.

At the moment, our failing economy is being propped up by unprecedented amounts of debt.

When our debt-fueled false prosperity ends, the true horror of the decay of our economic system will be revealed.

If you think it is hard to find a job now, you just wait.  What is coming is going to be a total nightmare.  As I have written about before, many years of pain are ahead.

But that doesn’t mean that you have to lose hope.

On my website, people often share how their lives have been absolutely devastated by this economy.  Some of them are even so down that they are considering giving up completely.

But that is the exact wrong response to all of this!

The reason why I try so hard to explain what is coming is so that it will not be a surprise to people.  If you make plans and preparations now, the times that are coming will not overwhelm you.  I believe that there will be people that will be greatly blessed even in the midst of what is coming.

However, millions of Americans that are not listening to the warnings now will have their lives totally destroyed by what is coming.

The world is changing.  Nothing is going to stop that.  The unprecedented prosperity that we have been rolling in is going to shrivel up and go away.

But that does not mean that your life is over.

In fact, if you get yourself physically and mentally prepared for what is ahead the times that are coming can be the greatest times of your life.

I wanted to thank you, the author of this article, whoever you are. I haven’t completely ruled out killing myself but you’ve certainly given me something to think about. And thank you for trying to give people like me a little hope. A little kindness, even if only through words, is at a premium these days especially in my life. I will think carefully about what you’ve said. Best wishes to you and your efforts. God bless.

Everyone out there that is in a similar position – please do not ever, ever, ever give up.

No matter how bad things look right now, there are people out there that care.

One thing I have learned in life is this – there is always a way that things can be turned around.

Sadly, in the future a lot of Americans are going to give in to despair and will completely give up on life.  We saw it happen during the Great Depression of the 1930s and we are seeing this in Greece and other European countries right now.

But the truth is that your life is not over no matter how bad things get out there.

You can let the times that are coming destroy you, or you can make them the greatest adventure of your life.

The choice is up to you.

I urge you to get ready, to get more independent of the system and to start focusing on the things that really matter in life. 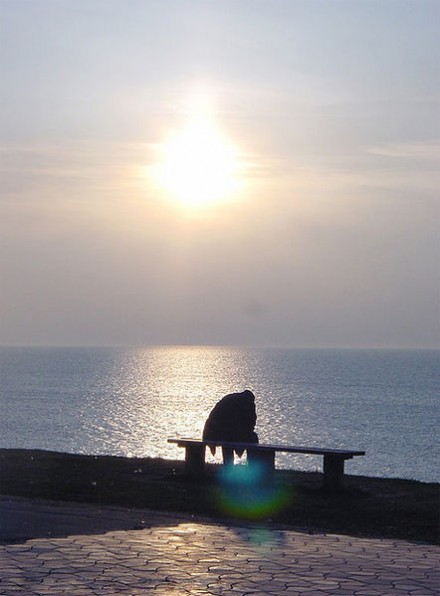