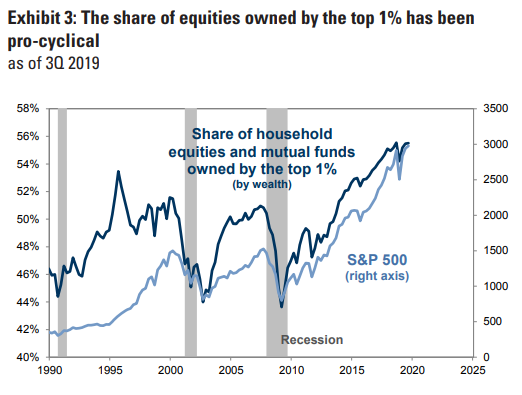 As the market has “rebounded” off its lows back in March, the world’s super wealthy are jumping at the chance to offload billions of dollars in stock while global central banks – and most notably the Federal Reserve – keeps a bid under the market and acts as a Mr. Magoo-like counterparty.

Many investors have been prompted to sell by market volatility over the last two weeks, which appears as though it could be signaling an end to the V-shaped recovery. This has likely helped spook the ultra wealthy into take some cash off the table.

Seo Sang-young, an analyst at Kiwoom Securities Co. in Seoul noted: “Stock-market valuations have climbed considerably regardless of fundamentals. Volatility has been increasing.”

Knorr-Bremse AG’s Heinz Hermann Thiele took the bump up in the market as an opportunity to sell about $1.2 billion in stock, while Adyen NV co-founders Pieter van der Does and Arnout Schuijff joined a group of executives that sold $821 million of stock in the payment company, according to Bloomberg. Fortive Corp.’s Mitchell and Steven Rales also sold about $1 billion.

Gerald Celente, TrendsResearch.com, joins to talk about fear, freedom and markets. The COVID measures are the most ridiculous govt gaslighting since “duck and cover” drills

Bloomberg notes that during the week ended September 11, insiders sold $473 million in shares while only buying $9.5 million.

Many of the world’s super rich have their wealth disproportionately tied up in company stock. For example, Jeff Bezos’ Amazon shares are worth $172 billion of his $186 billion net worth. For Mark Zuckerberg, Facebook stock makes up almost all of his $103 billion net worth.

Claire Madden, managing partner of Connection Capital concluded: “It’s the first time most people have lived through something as real, sharp and sudden as this. It does make you reevaluate.”

Recall, back in February of this year we wrote a piece showing exactly how the 1% was dumping their stock to daytrading Robinhood millennials with dreams of getting rich. We noted that February was the start of the the point in the bull market where the “smart money” dumps their equities to the unsuspecting and excitable, yet horribly uninformed, retail crowd.

The first chart shows the top 1% dumping as the market falls entering recession. Of late, we can see that selling has happened in spurts by the top 1%:

For the bottom 90% it’s just the opposite: the vast majority of unsophisticated retail investor start to chase momentum at the worst possible time, as they buy stocks en masse just as a recession begins, which in turn craters the market. In the Goldman chart below, we can see that the share of equities owned by the 90% jumps just as recession begin.

In laymens terms, the rich dump their stock to the poor just before the market crashes.

The technical term is “distribution.”