What is with the mainstream media’s obsession with the AR-15 rifle?

In the aftermath of Sunday’s shooting at the Pulse nightclub in Florida, Orlando Police Chief John Mina described the weapon suspect Omar Mateen used to kill 50 as an “AR-15 style rifle.”

The rifle used by the Islamist terrorist in Orlando was instead a Sig Sauer MCX carbine, a modular, multi-caliber (able to swap to different calibers, including 5.56 NATO, 300 BLK, and 7.62×39) rifle system that sometimes utilizes STANAG magazines common to more than 60 different firearms, but otherwise has no major parts that interface with AR-15s in any way, shape or form.

But leave it to the leftist media to misconstrue the facts, then run with their distorted versions of reality.

Note the following publishers’ false headlines and their insistence on hammering the American people on the evil AR-15: 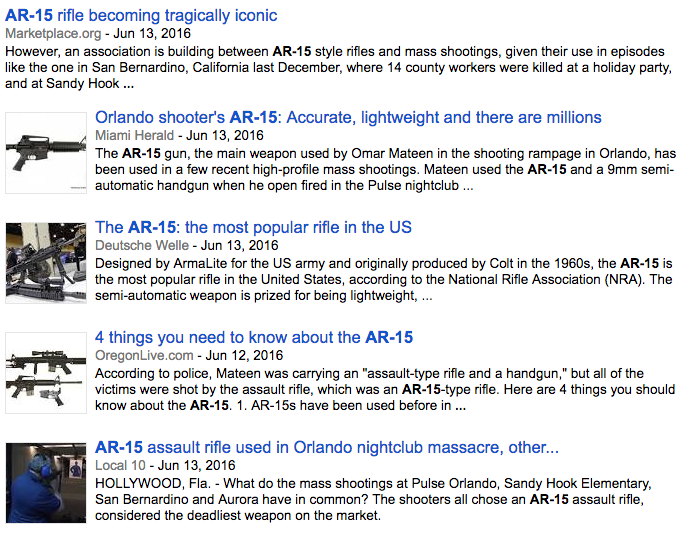 Surely Vice cares about accuracy in their headlines?

How about the UK’s Telegraph?

Certainly we can count on Mic to uphold the Constitution…

And the Washington Post maybe should have checked their facts before presuming to give a history lesson on the AR-15.

The same WaPo author later wrote an article with a revised headline pointing out the shooter DID NOT USE AN AR-15 – but “that doesn’t change much,” he wrote.

Of course, all the misreporting has caused AR-15 sales to skyrocket…

One store in Georgia sold 35 rifles within 3 hours of opening – roughly 11 guns per hour.

But the media’s not alone in their bumbling knee jerk reaction to blindly demonize a gun – any gun – in the wake of tragedy.

After all, President Obama described the gun which Omar Mateen used as a “Glock which had a lot of clips in it,” when caught off guard without his trusty teleprompter.

“It should be noted that Glocks do not have ‘clips’; they have magazines,” quipped Breitbart’s AWR Hawkins.