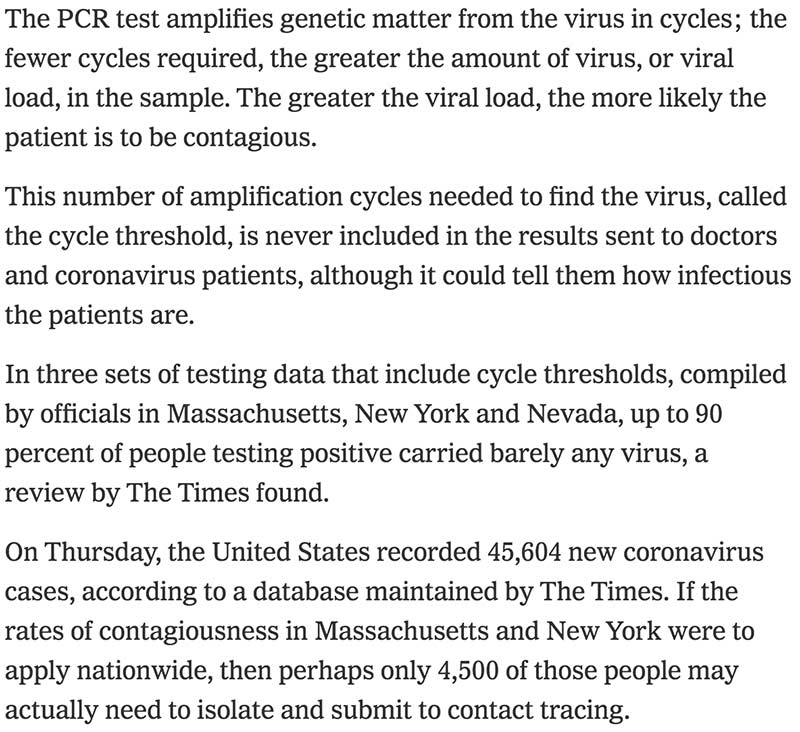 The New York Times says “up to 90% of people testing positive” with a standard Covid-19 test “carried barely any virus” because the test is too sensitive, and is thus “diagnosing huge numbers of people who may be carrying relatively insignificant amounts of the virus” and “are not likely to be contagious.”

In an Aug. 29 article, the Times said that the most widely used Covid-19 test, the PCR test, doesn’t provide feedback on how contagious an infected patient may be because it’s a simple “yes or no test,” and the test is so sensitive that it’s testing positive for “genetic fragments, leftovers from infection that pose no particular risk — akin to finding a hair in a room long after a person has left,” according to one doctor.

“Some of the nation’s leading public health experts are raising a new concern in the endless debate over coronavirus testing in the United States: The standard tests are diagnosing huge numbers of people who may be carrying relatively insignificant amounts of the virus,” the article begins. “Most of these people are not likely to be contagious, and identifying them may contribute to bottlenecks that prevent those who are contagious from being found in time.”

The article is only getting attention now because the Times gave it a rather weak headline despite the article turning the entire Covid-19 narrative upside-down, especially as politicians use positive case numbers to justify “mail-in ballots” in the upcoming election as well as the massive lockdowns that have destroyed jobs and disrupted families.

It’s almost as if the Times was forced to report on something it didn’t want to because the story is too big to contain, which is plausible given that an increasing number of people know someone who has tested positive for Covid-19 but never appeared outright sick from it.

“The PCR test amplifies genetic matter from the virus in cycles; the fewer cycles required, the greater the amount of virus, or viral load, in the sample. The greater the viral load, the more likely the patient is to be contagious,” the Times continued. “This number of amplification cycles needed to find the virus, called the cycle threshold, is never included in the results sent to doctors and coronavirus patients, although it could tell them how infectious the patients are.”

Interestingly, the Times also stated that similar tests for other viruses do provide a sense of how contagious a patient may be.

It’s rather convenient for politicians that the Covid-19 tests, on the other hand, provide only a simple “yes or no” result.

“We’ve been using one type of data for everything, and that is just plus or minus — that’s all,” said Dr. Mina, as quoted by the Times. “We’re using that for clinical diagnostics, for public health, for policy decision-making.”

The CDC admits only 6% of reported deaths were solely attributed to Covid-19.