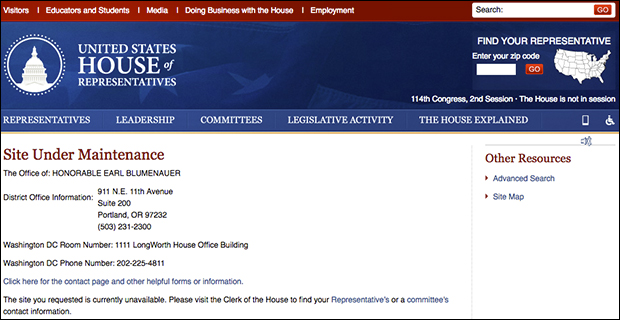 DCS, the company contracted to manage the websites, told POLITICO’s Eric Geller that more than a dozen Democrats were targeted last Thursday just two hours after the gun control sit-in.

“The sites were hacked,” Scott Ferson, the president of the public affairs group representing DCS, told POLITICO – claiming “no information was compromised.”

One of the hackers, according to Gordon Stanton, DCS’s director of congressional services, uploaded a “web shell to the database for one of the lawmakers’ websites” before using it as a pivot to carry out attacks on the remaining sites.

DCS, Stanton added, is currently working with Homeland Security to “remedy the situation in a way that restores the websites as quickly as possible while still ensuring comprehensive security.”

At this time it remains unknown as to whether the hack was a political response to the push for controversial gun control.

News of the attack comes at a time when the Democratic Party is already dealing with a negative image in regards to digital security.

Earlier this month a hacker with alleged ties to the Russian government released documents belonging to the Democratic National Committee following a year-long breach of the organization’s computer network.

Despite DNC claims that no sensitive information was taken during the hack, the leaked files included full donor lists as well as the organization’s opposition research into presumptive GOP nominee Donald Trump.