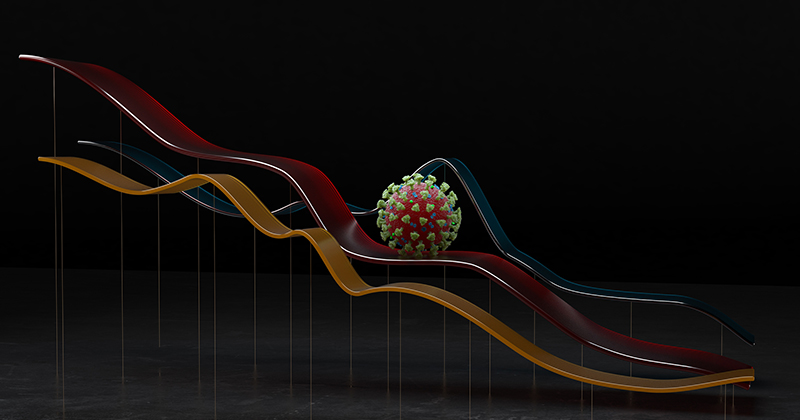 All over the world we are seeing numbers fall faster than we ever have before, and the outlook for the rest of the year is exceedingly bleak.

Fear of the coronavirus is going to paralyze global trade for the foreseeable future, and the lockdowns in some nations will last for many months to come.

Here in the United States, some states are attempting to make an effort to “reopen”, but in most instances that will involve “multiple stages”.

Alex Jones describes how when the First World collapses, the Third World dies.

Meanwhile, tens of millions of Americans have already lost their jobs, much of the population has already run through their meager savings, and financial institutions are becoming extremely tight with their money.

Even if COVID-19 disappeared tomorrow, our momentum would still take us into an economic depression, but of course this virus isn’t going to disappear any time soon.

After 9/11 our society evolved into an anti-terror state, and COVID-19 is going to permanently alter our society as well.

So anyone that was hoping for a quick “return to normal” can forget it, because “normal” is about to be completely redefined.

The pace at which economic conditions have deteriorated in recent weeks has been absolutely breathtaking, and the numbers just keep getting worse and worse.

#1 According to economists surveyed by the Wall Street Journal, the April jobs report will show that the unemployment rate in the United States is now above 16 percent.

#2 U.S. manufacturing orders just crashed by the most ever.

#4 Light vehicle sales in the U.S. just fell to the lowest level that we have seen since the early 1970s.

According to the CNBC/SurveyMonkey Small Business Survey released Monday, which surveyed 2,200 small business owners across America, while the $660 billion Paycheck Protection Program was instituted to give them a lifeline through the coronavirus and economic shutdown, only 13% of the 45% who applied for the PPP were approved.

#6 The “coming meat shortages” are already here.  According to the New York Post, Costco is now rationing meat and Kroger is warning customers of very serious supply problems…

Costco on Monday said it will be limiting customers to just three packages of meat per shopper, while Kroger supermarkets posted an alert on the meat section of its website warning that it may have limited inventory “due to high demand.”

Grocers have been bracing for a run on meat in mid-May as major meat processing plants, including Tyson Foods, have been forced to shut down production. But the shortages appear to have come earlier than expected as consumers worried about the meat shortage have been stocking up, experts say.

#7 Global smartphone shipments were down 11.7 percent in the first quarter compared to a year ago.  That represents the fastest drop on record.

#10 American Airlines posted a loss of 2.2 billion dollars during the first quarter of 2020.

#11 It looks like retail giants Neiman Marcus, J. Crew and JC Penney are all headed for bankruptcy.

#12 Fox Business is reporting that Hertz is preparing to file for bankruptcy due to plunging car rental ridership.

#14 Edmunds is projecting that auto sales in the United States this month will be down by more than half compared to April 2019.

#15 In Mexico, manufacturing activity is falling at the fastest pace ever recorded.  The following comes from Zero Hedge…

While few have lofty expectations for economic performance with the global economy still largely shutdown, what is happening in Mexico is simply unprecedented. Here are some striking observations detailing the unprecedented economic collapse of the southern US neighbor, courtesy of Goldman.

Business confidence declined sharply in April (the seventh consecutive monthly decline) with the index now sitting deep within pessimist territory. The Manufacturing and Services PMIs also fell sharply in April, and are now at the lowest levels on record.

#16 More than 30 million Americans have already lost their jobs, and economists are projecting that millions more will lose their jobs in the weeks ahead.

#17 In March, U.S. home sales declined by double digit percentages in every region of the country.

#18 White House economic adviser Kevin Hassett is warning that U.S. GDP could fall by up to 30 percent during the second quarter of 2020.

For investors, the good news is that stock prices have bounced back quite a bit after the initial crash, and many market optimists are hoping that this Fed-fueled rally will keep on rolling.

But others are warning that this is a trap for bullish investors, and Kevin Smith is openly telling everyone that this could be the “last chance to sell” before another huge move downward…

The stock market may be flashing some ridiculously bullish signals, but hedge fund bear Kevin Smith is sticking by his prediction that the Dow and S&P 500 are on the verge of a Great Depression-level crash.

In fact, the Crescat Capital founder warns, this is your “last chance to sell” before the impending collapse.

We shall see what happens, but for the moment the financial markets are doing their best to try to defy economic reality.

Unfortunately, economic reality is hitting most Americans like a ton of bricks right now.  We are in the middle of the greatest spike in unemployment that the United States has ever seen by a very wide margin, and most of the jobs that have been lost are never coming back.

And as bad as things are already, the truth is that this is just the beginning.

A whole lot more pain is on the way, and it is going to shake our nation to the core.

Our economic and financial bubbles lasted far longer than they should have, but now fear of COVID-19 has burst them all, and it isn’t going to be possible to reinflate them this time around.