The leaked video from the Alex Jones / Megyn Kelly interview released by Infowars is currently the #2 top trending video on YouTube. 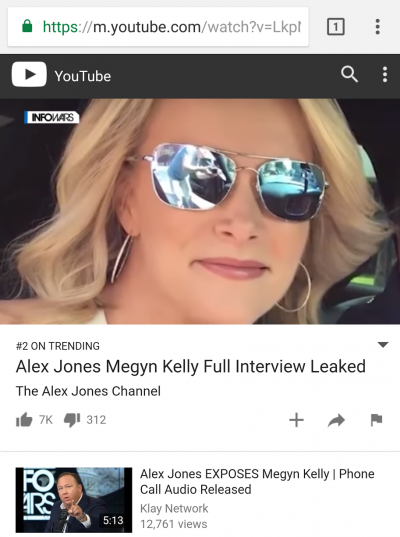 The viral video, which contains taped, pre-interview phone calls between Jones and Kelly, reveals behind-the-scenes deception by Kelly as she tried to assure Jones the interview was a profile piece not meant to demonize him.

“This is not going to be a contentious gotcha exchange; I want to do in-depth profiles on people,” she said on tape. “I could ask you [about Sandy Hook] and say, ‘This is what the critics say’ — but this isn’t gonna be an ‘a-ha! Let’s play a clip.’”

Kelly also told Jones “I’m not looking to portray you as a bogeyman… The craziest thing of all would be if some of the people who have this insane version of you in your heads walk away saying, ‘You know, I see the dad in him. I see the guy who loves those kids and is more complex than I’ve been led to believe.’”

Of course, the teaser of the interview later released by NBC contradicts her claim – and Kelly played a role in editing.

Kelly’s crew didn’t even bother to light Jones properly for the interview by using three-point lighting that’s a journalistic standard; instead they used “villain lighting” often used in cinema to demonize certain characters.

And this wasn’t the first time Kelly used edited video of Jones to fit her agenda; back in December, the former Fox host aired a deceptively re-edited clip from the Alex Jones Show to claim Jones said Hillary Clinton personally killed children.

Jones did say Clinton was responsible for the deaths of children – but in Libya and Syria after she fueled the rise of ISIS while serving as secretary of state, a fact left out of Kelly’s re-edited clip.

The leaked video is real-life documentation how the mainstream media routinely relies on deception to control public opinion though a facade of objective journalism.

“After a week in which Kelly and her producers have repeatedly assured viewers and the press that the interview will hold Jones to account, the leaked audio — from weeks before the interview — suggests a soft-focus piece designed to humanize Jones,” wrote Buzzfeed’s Charlie Warzel.