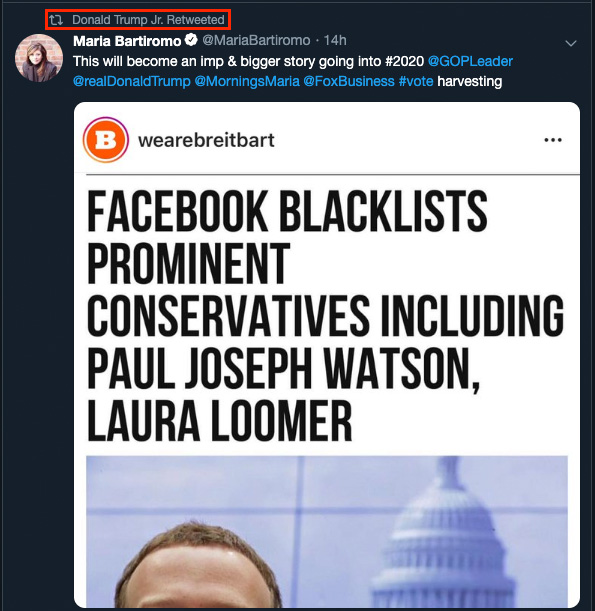 Donald Trump Jr., the outspoken eldest son of the president, is calling on people to come together to fight back against big tech censorship.

On Friday, Don Jr. said “everyone” should be “terrified” over Facebook’s latest “purposeful and calculated” ban on Alex Jones, Paul Joseph Watson and other conservative voices, in addition to Minister Louis Farrakhan.

“The purposeful & calculated silencing of conservatives by @facebook & the rest of the Big Tech monopoly men should terrify everyone,” Don Jr. tweeted.

“It appears they’re taking their censorship campaign to the next level,” he wrote, adding, “Ask yourself, how long before they come to purge you? We must fight back.”

The purposeful & calculated silencing of conservatives by @facebook & the rest of the Big Tech monopoly men should terrify everyone.

It appears they’re taking their censorship campaign to the next level.

Ask yourself, how long before they come to purge you? We must fight back.

Interesting to see Don Jr. identify the radicals Facebook banned as "conservatives" and suggest that's why they were removed. The reality is that Facebook took action against extremists. Farrakhan was also removed, and I don't think Don Jr. would call him a "conservative." https://t.co/hBrjBSyMKS

While five of the six people banned on Thursday have conservative leanings, many agree Louis Farrakhan was thrown in the mix to obfuscate the real targeted campaign against conservatives.

Similar to President Trump, Don Jr. on Friday also retweeted a screenshot of a Breitbart article tweeted by Fox Business’ Maria Bartiromo, signaling support for Infowars and indicating the Trump administration is aware of the situation.

“This will become an imp & bigger story going into #2020 ⁦@GOPLeader⁩ ⁦@realDonaldTrump⁩ ⁦@MorningsMaria⁩ ⁦@FoxBusiness⁩ #vote harvesting,” Bartiromo stated in her tweet.

Bartiromo’s reference to “vote harvesting” suggests she believes Big Tech leftists are attempting to meddle in the upcoming 2020 election, especially given Infowars’ pivotal role in helping President Trump win in 2016.