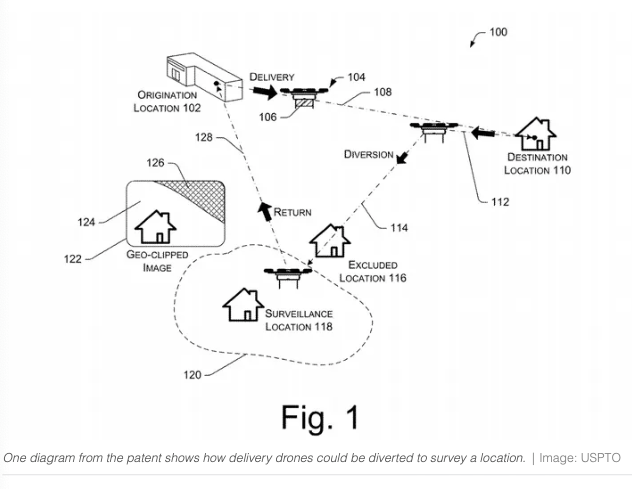 According to a new patent awarded to Amazon on June 4 by the United States Patent and Trademark Office (USPTO), an unmanned aerial vehicle (UAV) could “perform a surveillance action” over the home of an Amazon customer. It’s being dubbed as “surveillance as a service,” is a disturbing reminder that corporate America not only wants to monitor your search trends and social media posts but now wants to monitor the outside of your home.

A network of delivery drones would film Amazon customers’ homes from the skies while on their way to delivering packages. Artificial intelligence will observe the property for anything unusual during the flyover, such as broken windows, doors left open, and unauthorized people on the property. Customers can request security flyovers hourly, daily, or weekly, the patent said.

The patent explained, depending on the drone design and its sensors, still images, video, infrared, night vision, audio, and or real-time could be multiple monitoring types under the new service.

The fake news MSM is now targeting Owen Shroyer with smears that he called for Barak Obama to be “lynched”. Owen joins Alex in-studio to discuss Bid Tech censorship and the leftist smear machine.

Earlier this month, Amazon unveiled a new delivery drone that can fly vertically, like a helicopter, and horizontally, like an airplane for long travels. The company could be launching a drone delivery service in “the coming months.”

Using delivery drones for surveillance purposes raises enormous privacy concerns for non-Amazon customers who haven’t consented to the surveillance. The patent describes how geo-fencing could solve the privacy issue and allows the drone to capture footage of homes only owned by customers.

We have reported on numerous Amazon drone patents over the last several years, and it remains to be seen which of these inventions get incorporated into a drone.

Amazon dove fairly deep into the home security industry in February 2018 with the acquisition of Ring, the company that makes the “smart doorbell.” By the summer of 2018, Amazon launched Neighbors” as a crime reporting social network that allows users to upload Ring video of suspicious activity.

Delivery drones monitoring customers’ homes seems like a wonderful idea in the modern world, but Amazon will figure out how to abuse privacy rights like it did when employees were spying on Alexa conversations several months back.